There are the new games that will do what they do; new versions of Magic, World of Warcraft CCG, and Space Marine stuff from GW. At the show today I looked at some of the interesting Fall releases that might be overlooked otherwise. Some premiered at Gencon, while games like the World of Warcraft collectible miniature game was only showed to a handful of people via lottery. 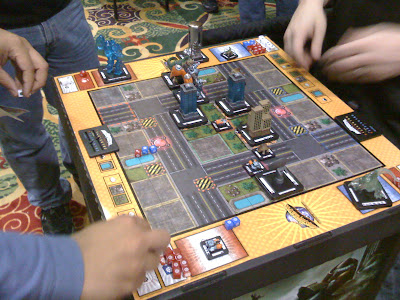 Monsterpocalypse was the first game I played. This was actually kind of fun, using my giant monsters to push around my opponent and destroy buildings. The game play was a simple dice pool system that alternated between your main big baddie monster and the smaller support pieces. I'm not much of a collectibles mini player, but I liked this game. 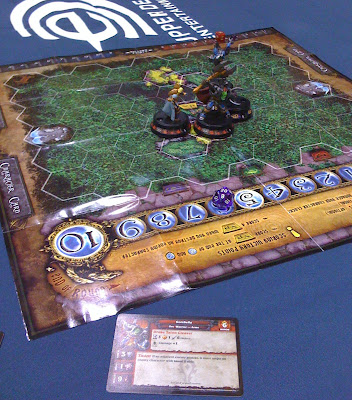 The World of Warcraft CMG has well sculpted minis with nice paint jobs. They're not "standard" 30mm or so scale; they're much larger. The game play used a 10 phase system, in which various actions would click your model forward, meaning you could do cool things but it would take up turn phases that would change your "initiaitive." Various monsters have basic attacks, wounds and defenses but also come with cards that allow for special attacks. What did I think? I think I'll sell a lot to WoW players, but the game play seemed a little stilted. I'm not a fan, but absolutely everyone else I spoke with thought it was a clear winner.

Other games? The Battlestar Galactica board game is supposed to have phenomenally good game play. I hope to play that this evening, along with the little Red November card game about the survival of a group of gnome submariners. It's by Bruno Faidutti, who does my favorite card game, Citadels.

What else? Asmodee is doing a new version of Formula De. It includes the traditional game, but it also comes with a street racer version, with drivers with special abilities. They say they have plans for new tracks once each quarter.
Posted by Gary Ray at Thursday, September 11, 2008