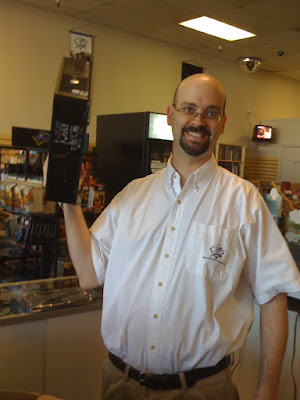 The new Dell arrived today. I hope it's not a sign of the poor economy that they got it to me about 10 days earlier than promised. But yeah!

I've got it configured and ready for the POS install tomorrow morning. It's a tricky install, with plenty of idiosyncrasies, so my local POS consultants will be doing the heavy lifting (unlike this photo).

Bottom line: Optiplex 755, twice as fast and 50% cheaper than a purpose built POS machine from Dell. 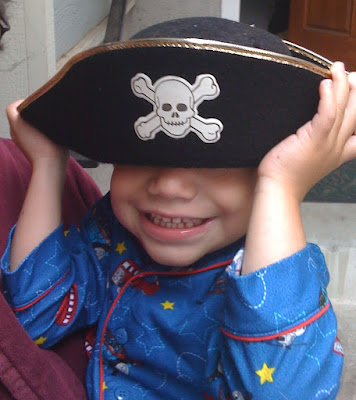 Talk like a pirate day was Friday and I missed it for the most part. Here's my 3-year old Rocco dressed up for the part.

Pirate games are a funny thing. I mention this because you would think such an international event like TLAPD would generate some interest, or at least see us exploiting this special time. However, the secret of pirate games is that most of them suck. There is the decent constructible pirates game from WizKids, which is in its twilight times, but most pirate games are actually pretty poorly done. The exception is Pirate's Cove by Days of Wonder. Check it out if you get a chance. Also, Manila has a piratey theme, kinda, and that's a very enjoyable game by Rio Grande.

So my issue with the bailout of Wall Street is more a philosophical one. It's the kind of game I enjoy most. Capitalism has seen a major shift; the death of Capitalism as an ideology, a creed, a philosophy of how the world works. To be a "true" Capitalist now and to be against the recent actions of the government is surprisingly, a fringe position. Because it happened on a Republican's watch, it should have extra powers of disillusionment for the faithful. So my big question is what kind of psychological effect will this have on American economic thinking? It's like an avowed atheist calling out to god for help when in mortal danger. Will we suddenly become an overweight version of France? And if not, why not? It's a big unknown. A lot of FUD (Fear, Uncertainty and Doubt). Oh yeah, and there's no Easter Bunny either. 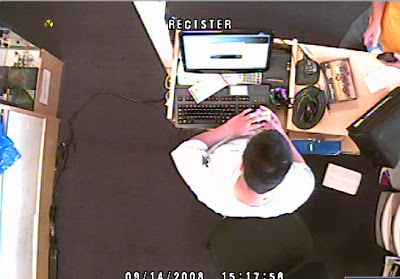 And finally, the security camera system is up and running on all cylinders. We haven't caught any shoplifters yet, at least none that I'll admit to (that's why I have tinted windows in my car). I'm able to view the cameras from anywhere via the Internet. It's not exactly compelling viewing, but it can be amusing. The resolution isn't great remotely, but you can make out the regulars with little difficulty.
Posted by Gary Ray at Monday, September 22, 2008