After jumping through hoops, I've at least got a crime report for my check fraudster. I'm told nothing really happens from here unless the DA finds some sort of motivation to go after her. The report is for a Lisa Holmberg, formerly of Walnut Creek (for the sake of Google searches). If you've been victimized by her, let me and the district attorneys office know. 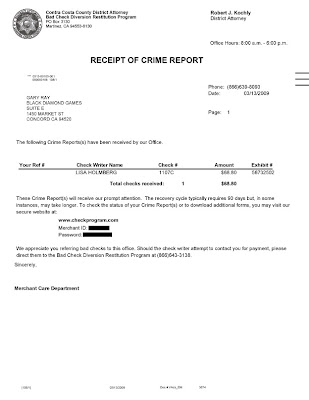 The scam worked like this: She bought a bunch of toys, supposedly for her son's birthday. She was loopy enough for me to comment later that I had my concerns, but everything checked out. Her ID matched her appearance and the address on her checks. In fact, when I called the police when the check was returned, they were able to confirm over the phone my description with the photo on her drivers license, since it's electronically on file. My certified letter to that address (required by law to file the report) was returned. Then she came back a day later and returned one item for cash. If I were to have a proper checks acceptance policy, the solution would have been to send her a check for that return after the initial check cleared, but I didn't. Wham, out more money.

The next day, a guy comes in with the receipt. He wants to return everything and he actually seems angry with me for her buying the stuff. In other words, he initially tries to put me on the back foot so I'll be more apt to do what he wants. I now begin to realize I've been had, and start to get a little belligerent back. I basically tell him something seems a little fishy, but if he wants, I can exchange the items. He tells me he's going to go to the stores upper management, but when I explain I'm the owner, and he notices that I keep glancing at the CCTV cameras that he's standing under, he quickly ends his tirade and scurries out, with nothing to show for it.

The end solution, as you know, is just not to accept checks. I used to lease a check verification system for about $35/month. After four and a half years, this is the first bad check I've received, albeit a deliberate attempt at fraud. The system would have cost me nearly $2000 to have avoided a $90 charge back. Bottom line: no checks accepted. Hopefully the pin pad will fill this role.
Posted by Gary Ray at Friday, March 13, 2009