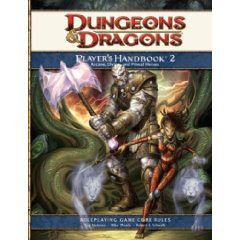 The excitement surrounding the Dungeons & Dragons 4th Edition Player's Handbook 2 hasn't been this intense since, well, Player's Handbook 1. The book is released on Tuesday and contains a bunch of new classes and races. Many have been available to DDI subscribers for weeks now. My own game has a bard (recently deceased), sorcerer and a druid. I think there's a sense that the game was missing content and that PHB 2 completes it, as opposed to adding interesting options as with the 3.5 version of the book. The gnome is also back, as is the half-orc.

Pre-orders for the book have exceeded total sales for any of the other books released since the June launch. It just seems like a no brainer if you're an active player. What I'm more unsure of are the power cards, which release at the same time. Initially I thought they might have been made redundant by the excellent DDI software, which prints power cards as part of character sheets. Then I noticed that few people at our RPGA game seemed to be using the software. Perhaps they're more useful after all.