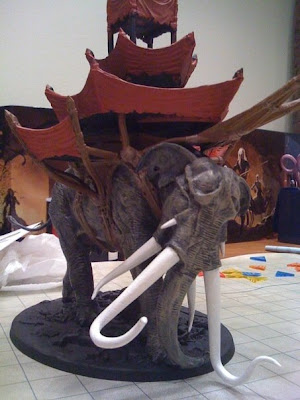 I still have 4-5 more hours on this guy, then another 5-6 for his 13 man crew. I can say now that I will not be doing the 3 mumak squad, at least not at first. After watching a game on Saturday, I expect I'll have a LOT more troops, likely additional cavalry. Two mumak are 500 points, so that's a good number of extra models to have on the table. One model that inspired me on Saturday were the trolls. They're very hard to kill, and although they don't do a lot of damage, they inspire some fear because of their size.
Posted by Gary Ray at Sunday, March 15, 2009