With the base finished, I'm declaring this model done. There are probably several things I could do to add more detail, but I'm calling it a day. I took a middle way on the base. I used Vallejo basing paste to cover over some of the details, including burying a couple of the bodies. They made nice grassy knolls. The areas where riders fell were based with a brown sand, while the surrounding area was based with static grass. Some bushes broke up the open spaces.

My next project is the mumak crew of 13, but I've also got my first box of Morgul Knights to work on. Chaos Black and Gunmetal Grey sound like a nice break from detail and color. 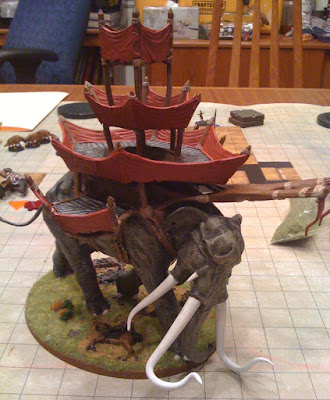 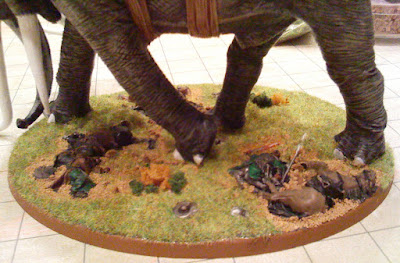 The base move for this army, excluding the mumak, is 10. So imagine an army of 45 horsemen, 2 chariots and an angry elephant with a crew raining down arrows. I envision the mumak taking the lead and charging forward, disrupting the enemy. Meanwhile, the horsemen in the back make a concerted effort to hunt down broken or split enemy formations. It's a theory anyway.
Posted by Gary Ray at Friday, March 27, 2009