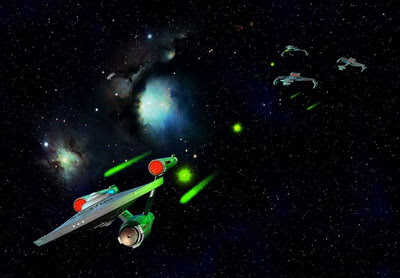 I think game stores are in the scenario known to Star Trek geeks as Kobayashi Maru. In this scenario, you're given options, none of which lead to success, as a means to test the character of the individual. You will fail, but it gives everyone a glimpse of your thought processes (how I feel about this blog sometimes!).

Game store owners find themselves with an ever decreasing margin, exemplified this week by Wizard of the Coast's decision to reduce the margin of Magic by 1%, in the name of marketing. This little tidbit was at the bottom of an email that mostly talked about how restrictions for selling Magic online were being loosened. Margins are usually reduced, as they were in this case, in the name of additional marketing budgets. It's for our own good. However, the programs eventually fade and the margin remains low, the original intent long forgotten. Margins have been reduced significantly over the last few years. It's the weaselly way manufacturers raise prices, without offending customers; they just offend retailers. I've found that for us, margins have gone down an average of 1% overall each year we've been in business, once I make adjustments. Meanwhile, other costs rise at around 3-4% a year adding to the burden.

"I don't believe in the no-win scenario."
James T. Kirk

So how do you win at Kobyashi Maru? How do you beat the system designed to test your reactions as you fail? You change the programming, as Kirk revealed in Wrath of Khan. There's two ways to do this, either cut your expenses or boost your sales. Cutting expenses is very hard. You've got a bunch of fixed costs like rent, and the variable costs are hard to modify. Will you cut your store hours? Will you adjust the thermostat? Can you reduce your garbage bill or credit card processing fees? These are drops in the bucket compared to fixed costs like margin on product. That's unsatisfactory, as Spock might say.

Better is to increase sales. Duh. Everyone wants to do that, but that's a slow slog unless you turn to the black arts (the Internet). Almost all successful stores sell online or at least dabble with eBay liquidations. There are limits to this, however, and the margin on online sales is often half that of in-store sales, when you make any money at all. I learned I can sell about $6,000 on eBay in a given month, which sounds like a lot until you realized the margin is razor thin and you don't have enough supply to continue. Where do you go? How can you short circuit the programming so you can win? You attack margin.

Increasing margin means you need a supplier that will give you better costs. The obvious thing to do is buy from the cheapest supplier, but even better is to expand the store into used product. Used hobby games is definitely a good way to boost overall store margin, provided it's done efficiently. You generally sell used product for 3-4 times what you paid for it, as opposed to twice your costs from distributors. In exchange, you accept it may sit there for a long time, and you'll eventually have used game "sludge" that will need to be discarded. The store owner is doing the work of finding the buyer for the game, and thus the margin is bigger. Bigger risks, bigger rewards. Still, used product is only about 3% of our sales, and we work hard at obtaining a good supply of the stuff. Even so, it's a small boost at best.

Some stores go a step further with what they call "the entertainment model." We dabbled with this a bit. You buy and sell used entertainment products, like video games, CD's, DVD's, etc., dealing more with the general public than hobbyists. Some see this is a revolutionary way of making money, while I see it as changing my business model to Sanford & Sons. It's a very profitable model in areas of the country where it works, but it's the way towards madness. It's crashing the Enterprise into the Klingon battle cruisers. Game stores usually cease to be game stores both in focus and in the minds of customers. It's great if you love selling games but would be equally happy selling womens' shoes, but if you're in this for the love of the hobby, it's a pyrrhic victory. Yeah, I'm the king of the junk heap!

The final option is to cut out focus on all comoditized games. For example, many game stores have stopped focusing on collectible card games. Sure, they'll sell them, but the game space is for the miniature players or board game players, because that's where their margin is strongest. Ceding CCG's is a good choice if you've got a lot of local competition, but it means taking the reigns as the leader in your replacement games. We make money on Magic and we have a huge turnout for FNM, but if I suddenly found a large crowd of miniature gamers who wanted to run similar events, I would be a fool not to give them the slot. Magic margins are always low.

More than likely, a successful store will try a variety of these strategies to see what works best. They may even diversify into other product lines that are less comoditized, although I can't recommend the dismal toy industry as an option. The idea of a game store that just sells stuff has been dead for years, as is the card shop model. The only question I have is what the future will look like as game store owners try to beat the system that is currently evolved into a failed model.
Posted by Gary Ray at Sunday, March 08, 2009