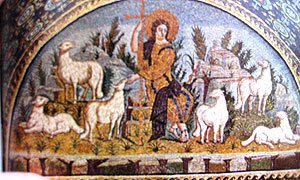 I speculated last year that many Free Market fundamentalists were having their world view shattered by the economic meltdown. The “invisible hand,” the idea of “pulling oneself up by ones bootstraps”, and the entire premise of our class system, which nobody with money wants to talk about, is predicated on a nearly religious observance of the Free Market. It’s strongly ingrained in conservative ideology and permeates our culture. So what happens when Free Market fundamentalists see their belief system collapse?

They certainly don’t blame the clergy. Money managers, traders, financiers and other elites of the world of finance are the high priests of the free market. They’ve received a free pass for the most part. What’s ironic, however, is if you really talk to the priesthood, they will tell you the market is not as free as we muggles believe. There are constant checks and balances, including government regulations that keep the markets running smoothly. Yes, high men of the faith admit this! The “invisible hand” is a complex web of laws and regulations that provides incentives and disincentives based on our collective will. It's subjective and it's not invisible.

The Free Market fundamentalists, much like with the Catholicism of my youth, are presented with just enough information to keep them behaving in the desired fashion, without causing them too much confusion. As an aside, I was shocked to learn in graduate school, that the Catholic Church has some amazing resources, such as contemplative traditions to rival Buddhism, yet these teachings, for the most part, are reserved for the clergy. No need to confuse the fuzzy wuzzies. The same holds true with economics.

So rather than blame the priesthood of finance, the free market fundamentalists act like superstitious people whose faith has been shattered in a crisis; they blame other parishioners for not doing their part. It was those who worshipped improperly at the altar of the free market, those poor people who bought homes they could not afford. They were lacking in understanding of the tenants of the faith. Forget that they were being guided by the financial priesthood, it is their own bootstraps that they failed to pull up. It's always about the bootstraps, whatever those are. They started all this! And while we’re at it, there were some heretic priests in the mix too that ministered to these poor bastards. We call them Democrats.

So on to hagiography. Hagiography is a kind of biographical re-write in which we take really good people we deem holy and make them even holier. Animals now flock to them. They have pithy quotes while being boiled in oil. They fly through the air or turn into a rainbow upon their deaths. You take a perfectly good historical record, a guide map for the simple folk on how to be a great person, and you turn it into a freakin’ comic book that meshes with your religious views. Perfection was never in your grasp anyway, common silly person; only God can have that, so just try to do the best you can. That's not your job, that's our job.

Now we see a kind of free market hagiography. An economic re-write that defies logic, the actual events, and all reporting on what actually happened. There’s a story the free market fundamentalists tell themselves now that’s a kind of hagiography. A bullshitification of the fact that the free market system was never free or fair, and was in fact broken by the high priests who ran the show. The religious studies term I like is "re-mythologizing." It accepts that the facts before were myths, but we're now pounding out new myths, re-cast in the light of a new interpretation.

Free market fundamentalists bristle as the new administration has a free hand in discussing issues of class and fairness as they sweep up the mess. Such blasphemy! Instead the fundamentalists work constantly to divert blame and most importantly, protect the faith. Rail against the poor, minority home owners. Blame Democrats for pouring billions into banks and subverting the whole system of pulleys and bootstraps. Balk at stimulus money. They’ll be damned if someone offers to pull them up by their bootstraps. The most important thing is to come up with some sort of story that keeps their conservative, free market faith intact. The government does nothing right and is to blame for this, after all.

Meanwhile, as a small business owner, I’ve got my own free market fundamentalism to deal with. I may be a Buddhist, but I was raised Catholic and I still don’t deny the existence of a God, you know, just in case. The same is true with economics. Which side is up? Is supply and demand still functioning? Are economic principles still at play? Listening to my Wall Street Journal small business podcasts, the rules seem to change each monthly. Do I discount now? Do I expand? Do I sit still? Warren Buffet has thrown up his hands in disgust. I don’t want to throw the baby out with the bathwater (or Buddha out with the bathwater, as we used to say), but how do you know what to believe anymore? And that is exactly why we’re in a crisis.
Posted by Gary Ray at Tuesday, March 03, 2009