January is usually the time for navel gazing, a slow period of reflection as we head into the dark first quarter. It's the after party month. It would be the plane of Pelion if we were playing Planescape. Obscure reference aside, I'm happy to report that I've done little gazing at my navel this January, except to lament the holiday pounds I've put on while working long hours in December. We're having a profitable January, the first ever. We're up almost 25%. I'm astonished, really. People are simply spending more money, across the board.

So with January coming to a happy end, I decided to take a look at 2009 compared to 2008. We were up about 12% in 2009, a decent number but not too surprising since it was our second year in a new location. We needed to be up that amount to be here in 2010, so it was expected and planned for. Grudgingly, I had hoped it would be higher and I blame the recession for that, with hopes that 2010 would make up the difference. The chart below goes over the winners and losers of 2009 compared to 2008. 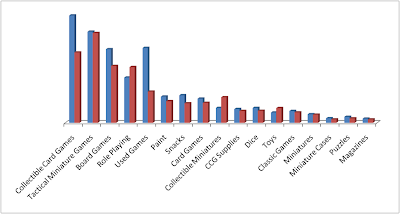 2009 = Blue   2008 = Red
The clear winner for 2009 was CCG's, especially Magic. Yes, Yu-Gi-Oh and Pokemon did very well for us too, but Wizards of the Coast made Magic and CCGs number one in 2009. They did this by reducing the supply, either intentionally or unintentionally (I don't care anymore). Reducing the supply created a price floor for Magic, which is often sold online at $5 over cost on a $145 box. Many Magic customers learned the retail price for their game in 2009, and lamented that it had suddenly gotten expensive.

This kept Magic players buying in the store rather than online from box flippers (the bottom feeders of the gaming world). We actively competed against the online world, pegging our box prices to online retailers, since we were all making an acceptable amount of money on Magic for a change. Our Magic organized play continued to grow too, thanks to the best volunteers in the area. Finally, local competition drove us to try selling Magic singles, which has become a very profitable sideline.
The other clear winner for 2009 were used games. Used game sales reflect the huge importance of our auctions (the next is February 7th). Not only do we buy and sell used games for the auction, but our customers have found it a quick and easy way to convert their old games to new games. Used games are now as important as any of our more popular game departments. This category also got a boost from the version hate created by D&D 4 and role-playing in general, as well as a troubled economy. When you look at the decline of new role-playing games for us, remember that used role-playing games skyrocketed in 2009, our own contribution to the long tail theory.
The 2009 losers can be summed up in yesterdays announcement by Wizards of the Coast that they won't renew the Star Wars license when it expires this year. WOTC makes the Star Wars collectible miniature game and the Star Wars role-playing game. Although I'm told collectible miniatures still do well in pockets of the country, 2009 was the year we put a fork in them. This month we dumped on Ebay our World of Warcraft miniatures and our Monsterpocalypse. Dumped is the only word for product that goes for ten cents on the dollar. Nobody wants this crap. Star Wars miniatures was the final holdout. We've gone from 30-40 cases of this game in its heyday to two cases, usually a special order case for one person and a case for the shelf. Star Wars is the last collectible miniature game we carry and the last we'll ever carry if I can help it.
Role-playing games seemed to go on vacation in 2009. I addressed that in a previous post, but I'm guessing that publishers let D&D 4th edition have its day in the sun. It proved not all that bright after all, as D&D sales slid quite a bit for the venerable brand. I am excited for role-playing games in 2010, however. I'm really enjoying and selling a lot of the new Warhammer Fantasy Roleplay (the dice packs come out today). My own WFRP campaign will see its second session on Sunday. I'm looking forward to Dragon Age RPG, by Green Ronin, due out February 8th. It will begin with an old fashioned, all inclusive box set like many of us started with. The Player's Handbook 3 will release in March for D&D 4, although I'm beginning to have my doubts about the long term viability of D&D in stores. Most importantly, the biggest release of the year will be the Dresden Files RPG, finally released in June. I'm thinking 2010 will be the year of the RPG revival, at least for us.
Posted by Gary Ray at Friday, January 29, 2010