There to Here: Decision to Start

The idea to start my own game store occurred in 2003, when I was talking to a friend at work about the possibility. Carl had coffee shop experience and I had an interest in games. We talked about a combination business that I still think would have been a good idea. After scouting unsuccessfully for properties in the Woodland area, where Carl lived, we eventually dropped the idea. Carl ended up leaving State Fund, where we contracted, but the idea continued to burn slowly in my consciousness.

I left the company a few months later and took an unusual vacation between jobs. I love cars, and the car that I was lusting after at the time was the newly released Dodge Magnum RT. This is the big wagon with the Hemi engine. Nobody in California would give me a deal on it, so I ordered one in Cleveland. My family was having a reunion in nearby Pennsylvania, so my wife and I flew out to Cleveland, picked up the car and went to the reunion. A cross country road trip back home sounded fun.

I talked with my family about the game store idea with mixed reactions, but the idea was growing in my head. On the way back home we visited a variety of game stores, especially in Wisconsin, which seems to have a fantastic variety of stores with different business models. Every mile I drove strengthened my resolve to open a store. By the time we hit Colorado, it was a done deal, and I raced back to consider all the possibilities.

My new job at Kaiser was a mess, with a giant team of people hired for a giant project without much regard to who would be doing what. It was a miserable situation. I was sent for software training back in Wisconsin for a package I would never use. I spent an entire week there working on my business plan in the evenings, brainstorming during class. A good friend of mine was interested in my idea, but he insisted I do the appropriate research. Research was most of what I did in IT, so a business plan seemed a natural first step.

The business plan was the most depressing, emotional roller coaster of the entire experience. It started with a feasibility study based on some potential locations. This provided income and expense projections and a general idea of what I was getting into. I studied my competition. I learned to run the numbers by reverse engineering other business plans. I ran projections, researched every potential angle, and came to the conclusion it couldn't be done. Then I would find some important piece of information that proved it could be done.  I ran it by my partner who pointed out why it wouldn't work. This back and forth went on for weeks until I finally had that eureka moment where I was confident I could make a go of it.

With a plan came financing, both from my partner, who knew I had a grasp of what I was doing (just a general grasp), but also from easy home equity. Since then, I've added several additional partners who have likewise shown some confidence in my abilities, thankfully. The first store was built over six weeks. I managed the construction during my lunch hour. Back at work, my employer failed to find something useful for me to do and I failed to engage the project enough to make myself useful. It was mutual neglect and not my finest moment. I still feel bad about it, but at a certain point I decided my job was to build out my store and ramp up for opening day. Being interrupted with real work became annoying. Moving on quickly was best for everyone, after all. 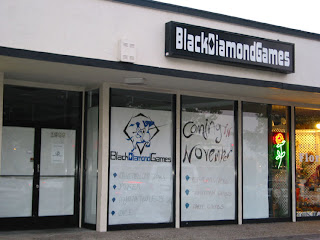 I had a meeting where my fate was to be discussed (I gave notice), and a few days later I was at my first trade show, back in Wisconsin again. I signed papers for financing in the hotel lobby. I bought my initial stock at that show. It was already rolling across country before I got on the plane back to California. I really had no idea what I was doing, but I had a decent business plan. That's what saved me. From concept to finished store took about a year, but there were many lucky breaks, lots of hard work and the support of friends and family to make it possible. "Trust in the plan" was the mantra for the first year, and it worked.
Posted by Gary Ray at Thursday, January 14, 2010