Look back to my January 2008 posts and they pretty much sum up January 2009, including the post holiday illness that now seems like a tradition for me. The creeping crud doesn't want to go away. The one exception to last year is this years strong post holiday sales.

I think I'll be looking back on January 2010 as the turn around month, when the recession was truly over, even though the economy was only improving in fits and starts. I am finding that the store tracks national economic trends pretty well, but I generally only see it in hindsight.  There's now a palpable sense of "normal," with customers willing to spend their money once again. There are also strong releases this month, especially for 40K and Warmachine, but also in board games and collectible card games. We need new product to sell stuff, but the real shift for us is the super charging of our events. The credit belongs to our volunteer event organizers.

Yu-Gi-Oh has taken off, after my prediction of doom when it was moved to Sunday nights. Our Magic crowd continues to grow, as other local stores see their turnout decrease. Psst, the secret is fun. We were selected for the Magic Oakland Grand Prix, which will be held at the store this Saturday; that certainly won't hurt. Our 40K crowd is strong, with both a casual league as well as our new Young Generals program we just started for kids on Friday nights.

We run the biggest D&D RPGA group in the Bay Area, again, focusing on casual, fun play rather than ego trips and convoluted hierarchies. Pokemon finally has company support, so that may become viable, and there are even hints that we may get a Warhammer Fantasy league started. Our board game night has not only critical mass, but now includes a level of board gaming expertise that's unmatched. Between Joe, Kevin and Miguel, you would be hard pressed to find a major board game release in 2009 they haven't played. Their passion for board games is extraordinary. Even better, they don't all agree on "what's good," so you'll get a lot of different opinions. I just provide the venue. It's the fantastic volunteers who deserve the credit, and my staff for successfully channeling it. 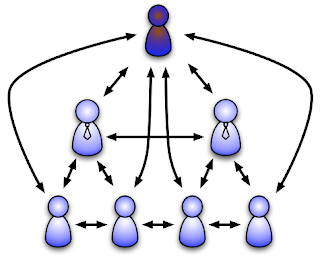 This distributed model of knowledge is the wave of the future. There's the concept of a shift index, where companies shift from the old style of hording and extracting internal knowledge to creating knowledge and participating in "knowledge flows." There are far more smart people outside our business than inside. Our staff should be knowledgeable, but where you really find an unmatched resource is the entire gaming community. Our goal then is to facilitate and tap into that flow and hopefully use it to our advantage (and yours). Our game center then becomes the heart of our organization, instead of the cash wrap.