There to Here: Getting Started

To survive your first year in business, you either need a lot of experience or a lot of money (to cover your on the job training). I had the latter, thanks to an investor and home equity, along with a business plan that projected I wouldn't be profitable until at least the second year. Because I had a business plan, it was clear I would require what many new stores lack, a budget for startup losses. This is the money you'll need to survive while you're losing money. Most stores that fail early tend to run out of money while they're working towards profitability, or they've spent so much money on their build out, they have nothing left for marketing or even their own salaries.

Salary for me was important. The first thing I learned when doing my research was always pay yourself first. Many store owners will claim profitability without including a salary for themselves. Is their labor free? Could someone else step in and do it without pay? Hardly. I was already established in life, with a wife, mortgage and student loans. Running this business presumed I could draw a salary at all times to cover my expenses. The business plan was designed to cover my needs first. It was reverse engineered from this point. If I need to make X amount of money to cover expenses and my salary, what would my sales need to be? If my sales need to be Y, how much inventory would I need based on average turns? My fascination with inventory management came from a very practical question. How can I continue to pay my mortgage?

My competitors would regularly visit me to express how impossibly hard it is to run a game store. One employee of Games Unlimited (now out of business) told me his prediction of my demise within a year. Some customers do the same if they sense blood in the water. The Internet will gobble you up, they would say, and your only hope is to offer similar discounts to us. If I hadn't been educating myself through the Game Industry Network and trade show seminars, I might have believed them. Also countering all this negativity were supportive customers that encouraged me to run events in the store and actually bought the games they recommended. They're still around, as friends, store supporters and even investors.

Within 18 months of starting, we hit profitability. That was later than I had hoped. I'm brilliant at projecting income, by the way, although the expense side was a real eye opener. During this time, my wife went on medical disability and the long awaited adoption of our son went through. This game store thing was starting to feel "real," although as long as my house was appreciating at the rate of my annual salary, I still felt like a gentleman farmer. This attitude of a hobby store as a hobby, really didn't  begin to change until the housing market began to falter. It was endless expansion as long as my house value was doing the same. I didn't know it at the time, but this was my second career propelled by an economic bubble. 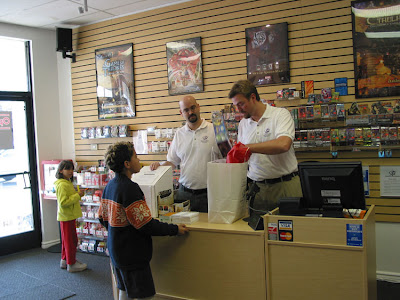