I'm considering a project to re-familiarize myself with Magic: The Gathering. I haven't played since 1995. Like many people, I trace my Magic history back to my last set, which for me was Ice Age. Back then I played with my friends (before there were tournaments) and I would like to think I was pretty good. Since then, competition and online resources have fine tuned players into competitive machines, but I want to get a current snapshot.

The plan would be to play in our constructed event to at least get one win locally as a competency baseline. How would I go about going from zero to win as quickly as possible? I'm willing to lay down some cash for cards, the idea being that I would donate them back to the store at the end of the project. Ideally, I would pilfer from my own stock. Would I buy booster boxes? Should I start with intro packs? Would I build deck lists from the web using singles? Is there one way that's more fun than another? Educate me Magic players. 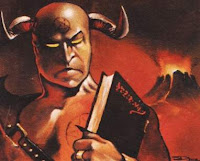