We played our first game of Warhammer Fantasy Roleplay last night. The group made characters first. Character creation is certainly the most difficult aspect of this game, but with a lot of collaboration, it finished well ahead of a comparable evening of D&D character crafting. We're playing with four players, thanks to the Adventurer's Toolkit, which supplies additional cards and materials for a fourth person. Two other players owned the complete box set, so we would have been fine in any case. The party consists of a rat catcher with his small, but vicious dog (from the toolkit), a roadwarden who has an ex-cop feel to him, a pacifist priest of Ranald, the god of thievery, and an upstanding priest of Sigmar, who wishes to preach the good word to the fuzzy wuzzies.

They were all drawn to Deadgate, a ramshackle town at the edge of existence that promised them riches in the form of an ancient, underground dwarven city. Unfortunately, the place exists to extract them of their money and prevent them from even beginning their underground delving. The priest of Sigmar is content to restore an old shrine in town and preach to the masses, but the others are seeking their fortunes. The role-playing began immediately and party cohesion was instant.

Deadgate is from the 2nd Edition book, Karak Azgal. One of the nice features I've discovered with 3rd edition is the ease of including a lot of older material. Most NPCs can be fudged. In combat, there are a few basic NPC's in the 3E book to use. For social skills, you can look at the percentage stats and adjust up or down with one or more difficulty dice, rather than an opposed check. Converting adventures with monsters is far harder.

The premise of the campaign is that the party is stuck in this frontier town and must choose between becoming one of the short-lived delvers or one of the opportunists who live up top, extracting cash from adventurers and each other.Think of the TV series Deadwood. There are mixed opinions about which way the party should go, but since they lack the required five gold pieces each to begin their delve, they're stuck doing the bidding of the Deadgate bossses.

The first mini-adventure was a modified version of A Day Late, A Shilling Short, a promo adventure from Fantasy Flight Games. Their potential new boss, Dmitri, is irritated that his "package" is late. His Kislivite mercenaries have failed to find the coach that was delivering it, and since the party has been running his errands of late, he sends them out with a promise of some gold. He also gives them his pitch for working for him, instead of choosing a short life adventuring underground. In either case, the party agrees to the gold offer and begins their search for the coach, their roadwarden especially well suited to the task.

On the road, the party comes upon a pack of beastmen who have ambushed and overturned the coach. This was a good beginning for us, as we learned gauging distances and the fundamentals of combat. The small but vicious dog drew first blood, a critical hit against the beastman leader, his rib cracking as the dog rammed headlong into him. The beastmen mobbed the priest of Sigmar before the group could bring them all down. As the beastmen were defeated, a horn blew in the distance, a clear signal that more beastmen were on the way. In a brilliant move, the party picked up the dead leaders warhorn, made a very difficult Folklore check, and blew the horn in response. They didn't know it at the time, but this confused the beastmen, delaying the second wave from descending upon them and giving them enough time to abscond with the contents of the coach.

The coach contained two young ladies and a nobleman. The two young ladies, clearly uneducated girls with little opportunity, were answering a newspaper ad for "floor performers" that Dmitri had placed.  They were unaware of the miserable life of prostitution ahead of them. Yes, lots of jokes about the kind of performances that would be happening on the floor. The focus then turned to the nobleman and his package. At first he refused to budge from the carriage, the beastmen fast approaching, insisting that if they just stay long enough, "proper" rescuers would arrive shortly. Various intimidation and guile checks finally got him to move along, along with a punch to the jaw and a small but vicious dog hanging from the package in his hands.

The party escaped the second wave of beastmen and headed back towards town. Through more negotiations with the noble, they were allowed to examine the package while he relieved himself in the forest. The package contained a journal written by Andreas von Bruner.  The journal showed various experiments dabbling with chaos. There were also letters in the package, including two signed confessions obtained by a witch hunter, showing that Andreas was involved in some sort of chaos cult. Another letter indicates that a powerful Marienburger diplomat was attempting to blackmail the Von Bruner family with the enclosed information. The party theorized on what this meant. Is Dmitri black mailing the Von Bruner family? Another knowledge check revealed the family had an estate in the region.

Still on the road, their next step may be to return the package for their reward, or possibly contact the Von Bruners for a much bigger reward, but at a higher risk of being perceived as black mailers themselves. Perhaps they'll use the information to black mail the family as they believe Dmitri is doing. Dmitri is surely a nefarious figure, but the party is not a bunch of heroic types, except perhaps for the Sigmarite (think Shepherd Book on Firefly). Will our Defiant Scoundrels do the right thing or the profitable thing? That's where we ended the game after four hours of character creation and play. 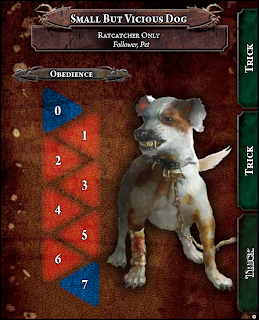