Running a game store is definitely not a good job for someone who needs control and predictability in their lives. Sure, you can run your little empire with an iron fist, especially if it's small, but there are too many factors out of your control. If it were a country, a game store would be like Bhutan; a tiny peaceful kingdom run by a benevolent king that has all the relevance of a third nipple. The problem with a game store is that you rely too much on the outside world (like Bhutan).

Income in a game store used to be derived primarily from the "backlist," the stuff that's been out a while. The market was big enough, pre-Internet, that you were the source of all gamer goodness. Nowadays, new releases determine if you'll make money in a month or not. New releases are timed by game manufacturers, and they want their games to be released during times when people are most likely to buy them, mostly during the Summer and before the Christmas holiday. Some manufacturers have enough releases to stagger them throughout the year, but most try to get the timing right for them. Unfortunately, as a retailer, you need to pay the rent every month of the year, not just the months when new releases are finally shipped.

Inevitably, game store owners are on a constant roller coaster ride, with giant sale peaks and giant sale valleys. A good store will eventually see a 7% or so profit as the end of the year, but they may have gone through dry months with store losses and blockbuster months with massive profitability. Owners know that eventually the customers will return during dry periods and they know that the hordes that have descended upon them for new releases will likely not be back for some time. It's like being a watering hole on the Kalahari Desert in the dry season.

For myself, we're finally seeing some rain after quite a dry spell, aka March. The holy retail grail for me is not something that will get me rich, it's smoothing out the roller coaster. Is there something else that complements games that might sell during off seasons? Could I diversify into Internet sales to boost my income? Is there some special event that could boost sales throughout the year? Nope, I'm like the king of Bhutan with my pointy hat. Master of all I survey in my shiny cash wrap. The games can be lined up with precision and the store shelves dusted on a military schedule, but I can't make the rest of the world come in when I want and make me prosperous. 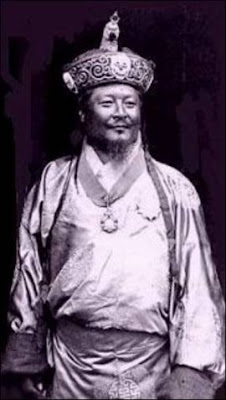 Ugyen Wanchuk, (King from 1861-1926).
I love Tibetan names, they sound like Asian gangster names, especially names like Jigme (Jimmy).
Sometimes they show up in my D&D games, like the legendary Jigme Lingpa (Jimmy the Linchpin)
Posted by Gary Ray at Monday, April 07, 2008