Another four hours and I finished the Basilisk. The majority of the time was trying to recover from forgetting a part. There's an internal gear to move the gun up and down, and although the gun doesn't physically move, without the gear, the handle doesn't appear to work. I had to snap off several pieces to include this tiny part and getting it back together was a nightmare. Only two more Basilisks to go!

You can barely see it, but I tried to load up every crew related item on the Basilisk. I figure if they're desert raiders, their vehicles will be much more like a mobile home than other armies.

While I wait for parts to arrive and search for camels, I'll also be looking for scale model kits so I can have "technicals." A standard Toyota pick-up truck should work. I sure have enough Imperial Guard emblems to stick on it. 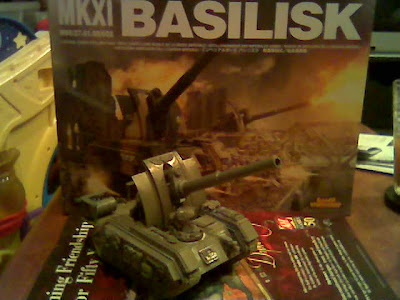