I don't usually write about politics unless something really annoys or excites me, and stays in my mind for at least a day. I'm not a political junky, but the country seems way to screwed up right now to not at least watch.

I'm starting to think the legacy of Hillary Clinton may end up being the person who brought down Barack Obama enough for the likes of John McCain to beat him. She'll certainly be long gone by the time of the general election, but her current shenanigans seem almost coordinated with McCain. This time it's Obama's talk about how Pennsylvanian's are bitter over lack of opportunity and decades of broken promises from politicians:

they cling to guns or religion or antipathy to people who aren't like them or anti-immigrant sentiment or anti-trade sentiment as a way to explain their frustrations.

That's a tiny snippet, but, well, yeah! It's true! I come from Pennsylvania and that pretty much sums it up. My family left there because of lack of opportunity and most of my relatives followed. Those who stayed are in a precarious situation, along with their family's, and because of widespread teen pregnancy, their families family; an extra generation that us Californiains don't yet have.

Of course many would find me a California elitist, also mentioned in the article, so I'm not sure I have much working man's cred. The comments were taken from a very well done speech that spoke truth about difficult subjects like class and race. Clinton's traditional election year pollyanna schlock-talk and McCain's fervent nationalist flag waving could never touch on these topics with so much honesty. Grover Norquist then jumped on Obama, saying "'He just announced to rural America: 'I don't like you." I think they jumped on Obama because what he said was dangerous to the elites.

It's probably longer than my blog post, but this CNN discussion seemed to sum it up well:

JEFF TOOBIN: I think that is so ridiculous. I mean that is not at all what Barack Obama said. I just think this is an example of how a campaign between the two of them can be purely destructive. And not elevate either candidate. I mean, Hillary Clinton is clearly distorting what Obama said. And by the way, what Obama said is factually accurate. It's been true throughout history that people who have economic problems lash out against various others. I mean, I just think it is an embarrassing for the Clinton campaign to hang on this as if it's some sort of gaffe by Obama.

BLITZER: It's not just the Clinton campaign, Jack it's also the McCain campaign. They issued a statement saying it's a remarkable statement and extremely revealing it shows an elitism towards and condescension towards hard working Americans that is nothing short of breathtaking. It is hard to imagine someone running for president who is more out of touch with average Americans.

JACK CAFFERTY: Really? And this is from John McCain?

BLITZER: No, this is from Steve Schmidt a senior adviser for John McCain.

CAFFERTY: Look, Jeff's right. They call it the rust belt for a reason. The great jobs and the economic prosperity left that part of the country two or three decades ago. The people are frustrated. The people have no economic opportunity. What happens to folks like that in the Middle East, you ask? Well, take a look. They go to places like al Qaeda training camps. I mean, there's nothing new here. And what Barack Obama was suggesting is not that the people of Pennsylvania are to blame for any of it. It's that the jerks in Washington, D.C., as represented by the ten years of the Bushes and the Clintons and the McCains who have lied to and misled these people for all of this time while they shipped the jobs over seas and signed phony trade deals like NAFTA are to blame for the deteriorating economic conditions among America's middle class. I mean, I'm a college dropout and I can read the damn thing and figure it out.

If you're really careful, you can talk race in America, but class is something American politicians don't want to address. Class addresses the fact that the values of this country have been seriously undermined by the wealthy, the likes of Grover Norquist. Class talk potentially pokes a hole in the illusion of equality and equal opportunity. It makes the rich nervous, and forces the middle class, who all think they're in a wealthier bracket than they really are, to re-evaluate their positions. The middle-class is where trouble always starts, at least according to Karl Marx and Political Science 101.

If that's too heavy for a Saturday morning, then look! There's a naked woman in the reflection in Dick Cheney's sunglasses! Did I mention people aren't wearing enough hats? 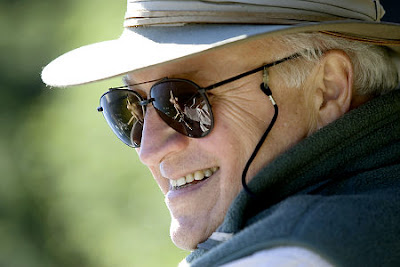