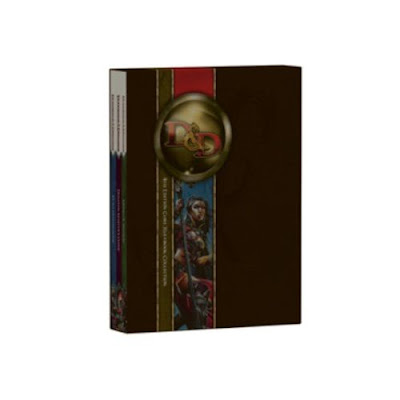 Today our main Dungeons & Dragons 4 shipment is scheduled to arrive. It's kind of a crap shoot. It's arriving via freight (meaning on an 18-wheeler), which is the exact opposite of efficiency, especially compared to FedEx, the usual Wizards of the Coast shipping method. It's not uncommon for truck drivers to get lost and attempt to call us. There's also a chance they'll arrive without a lift gate. This is the thing on the back of the truck that allows them to unload freight without a loading dock or forklift. Arriving without one happens about a quarter of the time. It's also up to the truck driver whether or not he'll be helpful unloading. Some roll up the back door and tell you to get to work. Some will unload it and bring it inside (rarer). Still considered helpful is handing down stuff off the pallet. This is all supposed to happen while I'm running the store by myself.

We're getting a wooden pallet of D&D 4, the largest order we've had that didn't involve a major store expansion. Without a lift gate, it means we have to unpack the pallet in the truck and hand it down to someone on the ground. It's something we need extra people for, so we've got staff and volunteers standing by. In exchange for this potential hassle, we get the books on Wednesday instead of Thursday, which means if all else fails, I can get them from a second source if the freight delivery goes all wonky. Remember, they forgot to ship us Keep on the Shadowfell. As smart a plan as that may sound, it turns out I'll have problems if I need that second source (really third), as I'll explain.

If you were thinking people are still on the fence about D&D 4, you would be wrong. They're sold out already at WOTC, and they've gone back to press. The print run was 50% higher than D&D 3,5, but we all know what a fiasco that was. The gift set is #4 at Amazon, while the Player's Handbook is curiously at #130. With that kind of ratio, I'm thinking the intense gift set pre-order is only the calm before the storm. What happens when those DM's or alpha gamers start their games? Unfortunately, the intense demand also means the distributors are down to a very small supply.

My main distributor has fewer gift sets available than I have pre-ordered. So much for plan C. Plan B was our book distributor order and they shorted us, despite having ordered months in advance. Talk about not giving us any love. Just an FYI, that the gift sets are in limited supply. The three core books are plentiful. The difference is the fancy cardboard sleeve.

The dual concerns of early release and piracy have been overblown, in my opinion. Other than the buy.com early release of what I now believe to be more than 8 copies, there has been little widespread breaking of the street date. There is the occasional mistake, but nothing serious. Today will be somewhat telling on street date breaking. The big stores got their Tuesday orders in yesterday, and it would be a common error to release the books early by mistake. We'll be listening closely for that and sending people around if we hear rumors. However, it will take a store receipt and a discussion with WOTC for us to break the date.

There's a lot of retailer concern about piracy, with the books easily downloadable via torrent, but I think in this specific case, it has actually knocked people off their fence. Early reviews from these pirate copies are everywhere and additional pre-orders have rolled in based on review impressions and electronic acquisition. These are books that really should be made into electronic format, but they're also books that are important to have as paper copies.
Posted by Gary Ray at Wednesday, June 04, 2008