This week had me doing some backfill modeling work, like replacing plasma pistols on sergeants with laspistols, messing around with different swords, priming what was left and generally procrastinating. Yesterday I put in a marathon 10-hour assembly line style painting session to finish ... five guys. My hour per figure number is definitively not on track. At least I'm pleased with my work. The goal is to get as much done as possible by mid-July, not only because that's when 5th edition is released (I've got one at the store and a bittorrent copy already, like everyone else), but also because the family returns that weekend and my time will be limited.

About 40K Humans
So we have these Tallarn guys (I made up word supposedly pronounced Tal-ARN), a kind of desert folk who used to live on a lush planet before it was turned to desert by chaos space marines. Their culture, according to the four main sources of information on them (GW website, Imperial Armour 3, the IG codex and the Desert Raiders novel) is Arab. It makes no sense that they have this Arab culture, or that they look incredibly caucasian, but I suppose a lot can happen in 38,000 years. In fact, all IG troops, as far as I can tell, are caucasian, as if the melting pot of humanity came up white, rather than brown. You can go ahead and model an IG army with different color skin, but it doesn't change their caucasian features. I would also like to see some women, since the IG novels have women warriors. There are women in some specialist games lines, but I wouldn't mind just a blister of a couple gals. Anyway, millions of worlds, billions of men, all caucasian. Huh.

Group Photo (20 men of 63, not including rough riders)

Button Men: I didn't notice until they were next to each other, but I've got two different lascannon button men (as I call them). One is probably from an autocannon team that I have off to the side. 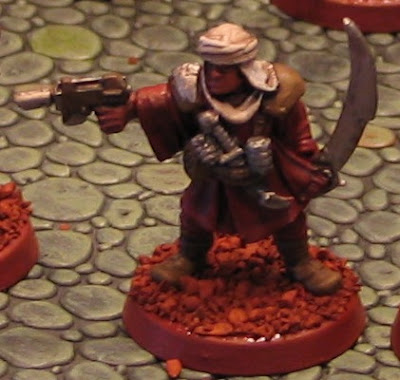 Sergeant Hand: It wasn't until I finished painting him that I noticed his pistol hand. Yes, he's firing his pistol upside down with his pinky. This was a hand I took off a Cadian officer this week and it's a left hand instead of a right hand. It's had me envisioning how Sgt Hand can fire the gun this way, but eventually I think I'll need a hand transplant. You have to pick up the model and look at the hand to notice, but I'll always know it's there.
Left to Do: They need their muzzles painted, something I only seem to notice when I'm looking at their photos. The first squad had a drybrush of bone white when they were finished. I'm not sure if it's worth the effort to brighten their head scarves. Everyone needs to be varnished too.
Posted by Gary Ray at Monday, June 23, 2008