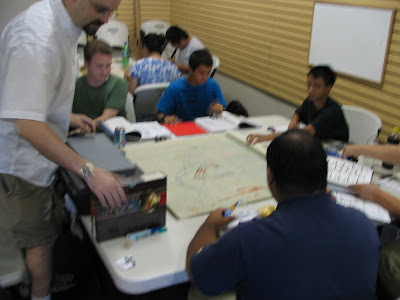 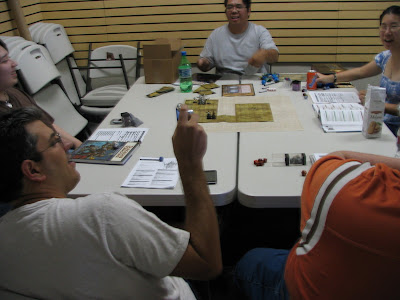 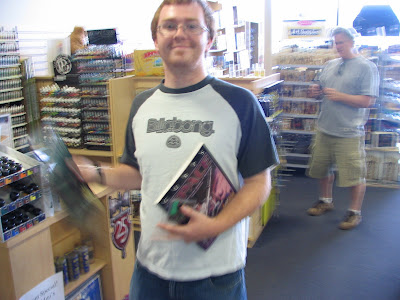 The store was packed for Free RPG Day yesterday. We had four games going using all the tables, including three D&D 4 games and a Trail of Cthulhu game. The mastermind behind Free RPG Day, Aldo

Ghiozzi, played in one of the games. We're his local game store. I ran one of the D&D games, my first time playing the new edition. I had planned to come and play as a player for the first time, but after a couple DM cancellations, I jumped in to run.

I ran Treasure of Talon Pass, the Wizards of the Coast adventure for the event. What did I think? It was a dungeon crawl, of course, which meant role-playing was at a minimum, but the adventure ran smoothly. I never felt as if I was learning a new system and the rules burden was generally left with the players, who had a bewildering array of special abilities. It's a lot like playing D&D 3.x with all the source books, with my usual Pythonesque question to the players with new abilities: "And what kind of thing is that?" I would mostly use my clever special abilities for the monsters and they would do likewise against my evil hordes. I never needed to look up a rule or a stat, except the treasure, which WOTC wanted DM's to roll randomly, ala AD&D style. Ta da! A reason to own the DMG.

Just an aside, the new Wizards of the Coast D&D 4 GSL is so incredibly restrictive that publishers cannot quote any rules text in their product. This means a) You'll absolutely need the core books with any third party product and b) There's a gigantic disincentive to produce third party products, especially with a clause that makes publishers relinquish their legal rights.

Combat went smoothly. Notice that I didn't say fast. These were second level characters and we were having some pretty epic combats. It sure beats the one pump chumps of 3.x. The players found these longer combats enjoyable and they were able to use their full array of options. I think some of the players petered out early though, with a lot of the same at-will attacks later in the game. Resting is now more about recharging cool abilities than regaining hit points. As D&D 4 is somewhat front-loaded with abilities, my main concern is that high level characters won't have enough options in longer combats, making it just as repetitive as a 3.x game. This was a complaint from play testers.

Despite combat being more epic for 2nd level, my group finished the adventure in 5 hours without their characters resting. Yes, finished, defeating the evil necromancer at the end and getting the magic treasure. This included seven encounters. If in the next session they finished exploring the other three encounters, they would level up. That's fast. Characters are supposed to level in 10 encounters in 4th edition, compared to the 14 in D&D 3.5. Add in faster game play, and you'll see some pretty quick progression.

Faster level progression is not a big deal, I think. It just increases the frequency of carrots provided to the players. It reminds me of martial arts. As a kid I spent two years in Japanese karate, eventually getting a yellow belt with a stripe; whoop dee do. It was a serious, traditional dojo aimed at adults who wanted to perfect their art. They taught kids mostly to keep their parents coming. Afterwards I moved to a Korean karate tradition taught specifically to kids at the local YMCA. In two years, it was not uncommon to go through a rainbow of belt colors, maybe even approaching black belt. Lots of carrots for the young-ins. You can divide up competency into an infinite amount of artificial levels. But are you having fun? Are there good enough incentives to progress?

We had drama in our game. The party split up and was not instantly slain, despite battle reports I've heard where DM's seem to suggest a more regimental combat style. The party often fought on two fronts and succeeded. There were pitched battles on catwalks with defender characters, while the rest of the party below fought minions and lesser creatures. Several times the key fighters in the party were knocked unconscious and needed rescue. At the end, the necromancer ambushed and killed the party's wizard with a couple of guard drakes, flying velociraptors. We had a great time for a dungeon crawl.
Posted by Gary Ray at Sunday, June 22, 2008