End of My D&D Campaign

We played the finale of my D&D 3.5 campaign tonight. The party bluffed their way into the final ritual chamber by convincing the vrock demon that they had a powerful being soul trapped in a gem that they were presenting for sacrifice. In fact, they did have such a being trapped, a celestial that they found but did not release from earlier in the campaign.

When Wuntad, the evil half-demon leader spotted them, all hell broke loose. They had fought before, with the party killing his party, with Wuntad narrowly escaping. The party managed to eventually destroy all the containment chambers and kill all the priests, effectively ending the ritual. 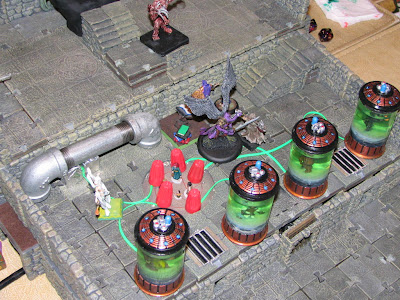 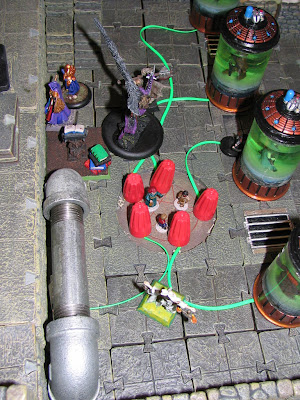 In this photo, the vrock demon makes his last stand to preserve the ritual. Once the ritual was disrupted, he teleported away, his commitment to Wuntad fulfilled. This changed the encounter from utterly hopeless to just incredibly difficult. 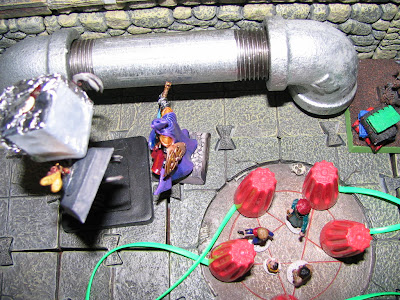 On the left we have Wuntad, who has come down to the ritual level to deal with the party. In his right hand he holds the faerie cleric, who he has grappled and is slowly killing with his evil power. In his left hand he holds a chaos cube, a container of pure chaos energy. He is threatening to crush the children with it. The party is attempting to block his throw, NBA style. They eventually "stuff" his first shot, sending the cube down to the lower level. Eventually the trick is repeated with a Gust of Wind spell and now two chaos cubes sit in the far corner. 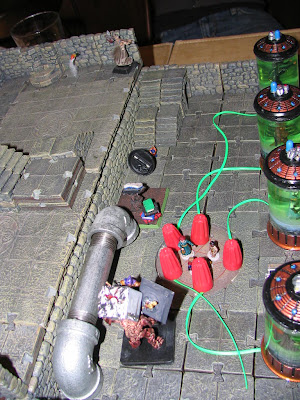 In a final act of desperation, the party's resources close to exhaustion, the wizard, hiding behind the evil black throne at the far end of the chamber, brings lightning down on the cubes, destroying one and creating a cascade explosion that destroys the second cube. In D&D term each cube does 20d6 points of damage in a 100' radius. In the first cube's destruction, everyone in the chamber is killed except the wizard, the sorcerer on the high level, and Wuntad, who is badly injured. The second, cascading explosion kills Wuntad.

Once Wuntad dies, the giant black throne that the wizard was hiding behind collapsed on top of him in a lake of acidic goo. He dies as the sorcerer runs over to save him. The sorcerer was the sole survivor. He releases the captured warlord, the final sacrificial victim, which prevents her troops from sacking the city in search of their missing leader. The world was saved and war averted.
Posted by Gary Ray at Sunday, June 08, 2008