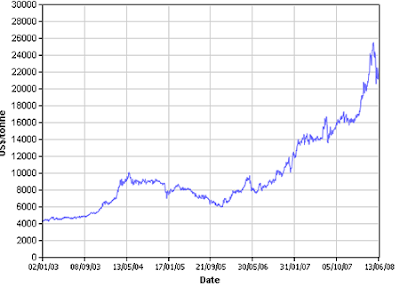 If you thought oil was going up in price in a dramatic fashion, consider tin. Like oil, it's another case of the developing world outstripping supply, but also like oil, there's a booming commodities market inflating the price. Suddenly wealthy developing countries, like Indonesia are intent on limiting supply to cement their strong position, similar to Saudi Arabia with oil. What does this have to do with you?

Company that use metal in their miniatures have raised their prices in the last several months, except one (I'll get to that later). Reaper miniatures raised their prices about 20% recently. Battlefront, maker of Flames of War did this too, roughly at 20%. Privateer Press has announced their line will go up precipitously in price starting in July. I was searching for the graph above and found it on the Privateer Press blog; they know what's going on. You aren't seeing these price increases in the store, as these companies products are suffering already, for other reasons. Raising prices is something we're doing only on re-stocks. It's a perverse kind of sale.

These aren't run of the mill price increases, these are "we can't stay in business like this" increases. These are severe, critical business model changes and if the commodities market stays like it is, more promises of stable prices will be broken. In other words, don't be surprised to see increases occur again at any time. Companies that rely on plastic (oil based) and tin are fighting for their lives with an incredibly unpredictable price for raw materials.

This is happening at a time when these metal based miniature games are on the decline locally. We're liquidating about a third of our Reaper miniatures and cutting back on buying new ones. When we opened, we carried the full line of Reaper. Sales at that time were respectable. People painted miniatures and used them in their role-playing games. This was almost four years ago, and I'll blame the decline on World of Warcraft, which sucked up RPG gamers like a giant Hoover. The increasing quality of WOTC plastic miniatures is also to blame, but I can't show you a shift from one to the other, as people just stopped using miniatures, period. Sales are way down on both. RPG's are coming back, I think, but the mini painters are not. People who paint their miniatures for role-playing games are a shrinking crowd, and we've "carried" Reaper through this decline for one too many years. They won't all go away, but it's another product line where the free pass has been revoked.

Flames of War has already seen its inventory reduced because of a severe decline in sales. Warmachine still maintains it's place as a top game, but "turns" of inventory are down by a third over the last year. Both of these games suffer from the opposite of my Imperial Guard problem army: Too many models. I get reports from other local stores that they've also seen a decline of all miniature games, save one.

Now lets discuss the evils of the greedy corporate giant, Games Workshop. They've changed their major problem, poor customer service, becoming a model game industry company with the best support for customers and retailers. But what about their greedy price increases? We can now see the advantages of big. GW has a 5-year price structuring program in which the line is increased in a steady, plan of annual adjustments. Face it, inflation is about 3-4% a year when things are normal. GW just tackles this professionally rather than as a "whoops, my gas bill is high and I'm sorry to do this to you" kind of way, which I've seen from Battlefront and others. Because of this, you don't see their prices increasing this year because of the high cost of oil or tin, the main ingredients of their models.

Their long term strategy seems to be able to absorb these swings. You also don't see a decline in players of these games, as they maintain their long-term strategies of revision and refinement. Battlefront can take their late war strategy and shelve it over by the Privateer Press pirate models gathering dust. I think what we're seeing is the minis revolt against GW,started two years ago, peter out. The energy behind it seemed to be about money, as in they keep screwing me out of mine. Now you need to re-evaluate your math and compare what it takes to play these games. GW doesn't seem so expensive anymore.

You can best judge a business by how it handles mistakes. Any monkey can sell you something, but how do they handle returns or screw ups? A baboon can manufacture miniatures, but what happens when parts are missing? Weathering vast economic change, such as recession or wild raw materials price surges will be another way we'll measure the health and good planning of a business. Who will be here a year from now? With the struggling economy and commodities markets, I have no idea.
Posted by Gary Ray at Tuesday, June 24, 2008