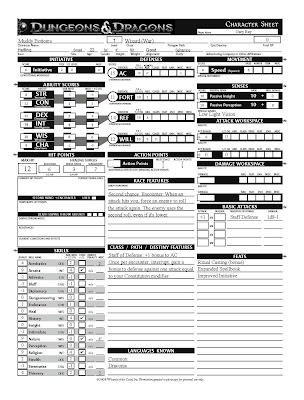 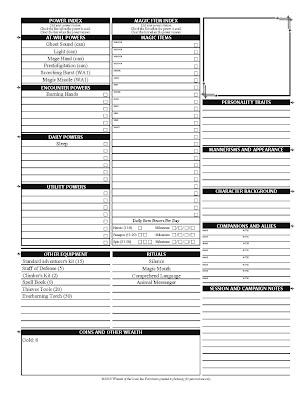 I made my first D&D 4 character for Michael's game yesterday. I probably won't get a chance to play him, but the process was interesting. I figured out what the party needed, and got started. A wizard was the only criteria I had. The group was playing hippy style and collaborating to build their world. So far they had a village with some surrounding mountains and a river.

I "tagged" that the river was navigable by halflings, Spirit of the Century style, and Muddy Bottoms, the halfling wizard, was born. So I'm looking at the halfling, with it's charisma bonus and dexterity bonus and I'm wondering what that has to do with a wizard. It became obvious as I started computing how the stats effect abilities. His Int of 18 trumped his 15 Dex for an armor class bonus, but then I noticed the "war wizard" specialization uses Dex for a number of offensive spells. A halfling wizard, therefore, is suited as war wizard, as opposed to controlling wizard. Charisma became my "dump" stat, although if I had wanted a high Will, that would have been my ticket. Dumping Cha got me that high Int. Michael assigned me a 27 non-standard point buy for building my character, much more complex than the book method, but fine with me.

Working out skills was a pleasant surprise. No more skill points! Pick the skills you're proficient with and you get a +5. I was using an excellent fillable PDF character sheet that even did some of the work for me. If you like to make your character on the computer, get this. Anyway, for Muddy Bottoms, skills were obvious choices, since Int was his only positive bonuses for Wizard skills. I also noticed how high some of the roguey skills were getting, thanks to his Dex and Halfling bonuses, and made a mental note to take a multiclass rogue feat later on. Meanwhile, I bought him thieves tools, since you can use most rogue abilities without being a rogue now. The party has a rogue, but an extra set of nimble fingers couldn't hurt.

Spells got a little complicated with various cantrips, rituals and powers, but once I figured out where everything was laid out in the book (rituals are in the back), it was a breeze. The same could be said for weapons and armor. It's just like 3.x with these items in the equipment section.

Overall the character took about half the time it would normally have taken. A wizard is probably the most complex character to make, but this was pretty easy. I read the Player's Handbook before making the character, so it took me much less time than the rest of the group, some of whom were cracking their PHB's for the first time. Choosing the wizard's role was a big time saver. Once the role was chosen, options were somewhat limited. I mostly went with the book's suggestions, except for choosing the almighty sleep spell, still a no-brainer in 4th edition.

The best part about a 4th edition character? I'm pretty sure that I made it correctly. Gather up a bunch of character sheets from a 3.x gaming group after they've just made their characters, and it won't be an issue of whether they made mistakes, it's about how many mistakes they made. If you don't believe me, download any pre-generated 3.x character from the Wizards of the Coast site and you'll find from 3-7 errors per character. Worse, hand those error ridden characters to two different DM's, and they'll find a different number of errors! I'm a big fan of the simplicity of 4th edition.

Oh yeah: The Improved Initiative feat was a house rule bonus feat, if you're checking out the character sheet.
Posted by Gary Ray at Thursday, June 12, 2008