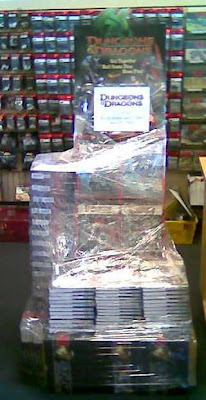 Our D&D 4 display sits in front of the cash wrap area, waiting to be unwrapped tomorrow. The pre-orders are in one of the display cases: 38 gift sets and 3 Player's Handbooks. The freight company delivered everything right to the floor of the store, so the delivery went as smoothly as possible. I had to order more books, however, since the Baker & Taylor order didn't ship any Player's Handbooks or Monster Manuals. They said they were back-ordered until sometime in June. I canceled the order, but man, with 5 months advance notice, you think they could have pulled it off.

This release should give you an example of what it's like in a small retail store. You take a big chance on a giant release. That release is sold by a variety of very large competitors, both online and brick & mortar, who may or may not sell them early or at a gigantic discount. As far as I can see, any attempt at a huge profit on anything is tempered by these competitors. It's like a release valve when the pressure gets too high. That's great if you're a consumer, but it's a tough way to run a business; many down sides, no longer many upsides. It works well when you get lucky, but any of the players along the way can screw over the small store without recourse.
Posted by Gary Ray at Thursday, June 05, 2008