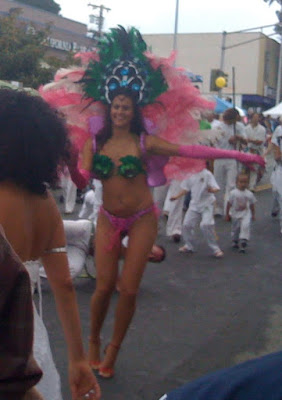 I went to the Solano Stroll today with the family. You can see an album of the photos here.

The iPhone is working out alright. After a week with it, it's definitely an urban device. The special third generation phone features require a sophisticated network to support it. I got none of that support in Wisconsin for three days, but it does great things in the Bay Area and in the Minneapolis airport. Without the 3G support, you're expensive phone loses its mojo, transforming it into a standard old cell phone (while you still pay for 3G service).

Battery life is actually pretty good on a full charge. I spent about 4 hours on planes watching videos, mostly free TV shows from iTunes, like Battlestar Galactica. iTunes seems like that next great thing for watching TV, provided shows are posted in a timely fashion (I haven't checked).

Also, for podcasts, video is the way to go. Boardgames with Scott is vastly more interesting with video, for example.

What does kind of suck with the iPhone is portability. There are things I watch on my laptop that I would like to have on the iPhone, but haven't been able to figure out how to get them transferred over yet. For example, AVI files are the format of choice for a lot of video, and I've got a MP3 ringtone I would like to install. I'm sure I'll figure this out later, but it's not as seamless as I would like.

Applications are fantastic, and the free ones are often better than the pay ones. My installed apps include:
Absolutely amaizing apps include White Pages and Wikipanion. Want to know the details of anything? Use Wikipanion for an instant encyclopedic lookup. Want to find something? Look it up in White Pages and have it create a map for you from where you are now (a feature using the iPhone GPS) and the White Pages location. Pretty cool stuff.
Posted by Gary Ray at Sunday, September 14, 2008