We're restructuring some of our miniature game events, starting today at 12:15 with a staff run War of the Rings kickoff. We're also creating staff run events for Warhammer 40K and Warhammer Fantasy. I'm not a big fan of staff events, unless you're overhead is ridiculously low, like many stores in the Midwest. Most stores in high cost areas rely on volunteers or unpaid owners who love their game and want to promote it. I admire their dedication, but for a single owner store, I think it's a time sink. Instead, I want to try something different and run our top games with staff to see what we can accomplish. Maybe I'm wrong about this. The worst case scenario is I prove myself right. How bad can that be?

Whenever you make a big systems change, it's good to first perform a baseline analysis. This is a snapshot of how things are now so you can measure the change in the future. I'm attaching a pie chart. It's a poor baseline graph because it doesn't show growth, only proportion. We want the pie to get bigger, rather than shift around, but proportion tells us things too. What we can't factor out is the biggest growth factor, new releases during this time. 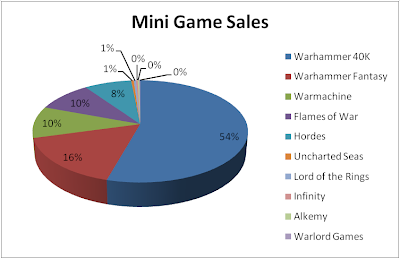 Also, since I haven't done this in a while, below is the breakout by army for Flames of War. It used to be far more even, but now the Germans have taken over. 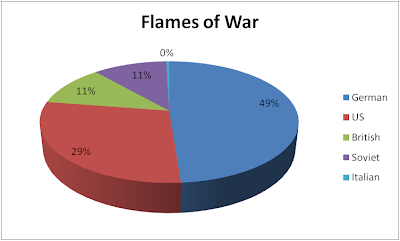