I built another chimera today while also working to get a big toe removed from the base of a sentinel. Both took about the same amount of time, and in the end I had a completed chimera and a freakin' big toe still stuck to a base! I finally just squirted out a bottle of Z7 Debonder and soaked the big toe in a dish. Still, it would not come off. I considered destroying the model and making it a wreck terrain piece.

Then it hit me. This sentinel is one tough mofo! It's been sheared off and re-glued at the hips and legs. The feet have been sheared and re-glued so many times that they look almost like an organic elephant foot. The toes of both feet have been cut off and re-attached several times, just to get that big front toe in the right direction. I reglued it, snapped it off once more, and reglued it one last time. This sentinel WILL fight, big toe of one foot facing the rear or not. This sentinel is now my good luck sentinel, my command squad sentinel. It will look like it's been beat up on the battlefield when I'm done painting it, but it's not getting away with being scrapped. Oh no, it fill fight and die for the emperor.

In other news, I sold me Flames of War army today at our store auction. The proceeds will go to the Imperial Guard fund. 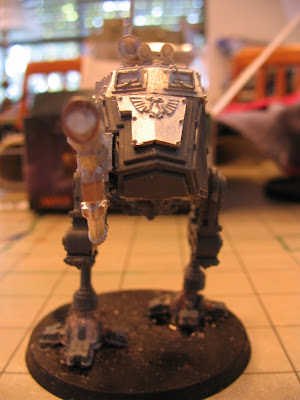 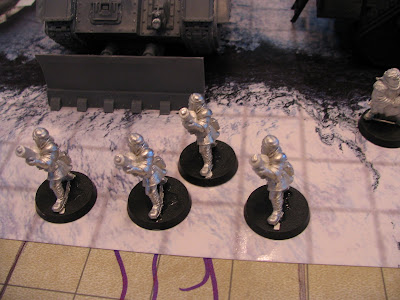 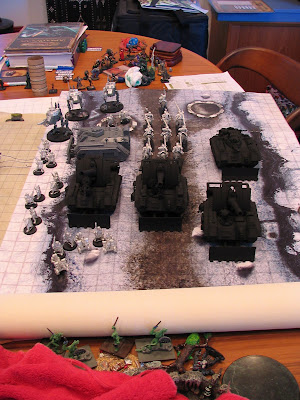 Everything so far. Still waiting on the core troops, 6 boxes of 10 figures, along with some lascannon and grenade launcher figures. Two side projects are also in the works: an Armageddon class basilisk (enclosed crew compartment) and flamer models.
Posted by Gary Ray at Saturday, May 17, 2008