The 40K game system itself is fine, but my issue, before even playing seriously, is the Imperial Guard codex. A set of rules should provide options that are useful. They might not always be useful. They might only be useful in clever combinations. The problem with the IG codex is that there are so many very cool doctrines and equipment choices that never make sense, or only approach making sense in ridiculous quantities. The point costs are just too high. Clever one shot combinations are one thing, but there are many options that nobody will ever pick because of the cost. That is disappointing and a sign that the game design is lacking rigor.

It would be the Dungeons & Dragons equivalent of saying that the fighter, cleric and wizards are good choices, but the bard, sorcerer, rogue, druid, ranger, paladin, and barbarian are crap, or at best only good when in extremely specific situations and only once. That's pretty much how Imperial Guard doctrines break down in usefulness. One of the complaints about D&D 3.x that's fixed in D&D 4 is that with a little creativity, it's possible to create entirely incompetent characters because of the toolbox nature of the rules. From what I'm reading about Imperial Guard, the army is incredibly difficult to play unless you follow very narrow parameters in army design. A good army is the exception, not the rule, which means the creativity of army design is lessened dramatically.

If you want flavor, it means you make concessions to effectiveness. If you want to play Tallarn raiders for example, you might end up taking doctrines like Sharpshooters, that most people think are marginal at best. It's like the D&D equivalent of crap feats, like Alertness, chosen in protest to qualify for some cool prestige class, only in 40K there's no payoff. I'm not sure if this is true with other army codices, and I certainly didn't feel these constraints in Warhammer Fantasy. Nevertheless, I'm happy with my choices and I'm enjoying the army building. However, as a power gamer and someone who enjoys roleplay and flavor, those lesser choices, chosen for color, weigh on me and take away some of the enjoyment. 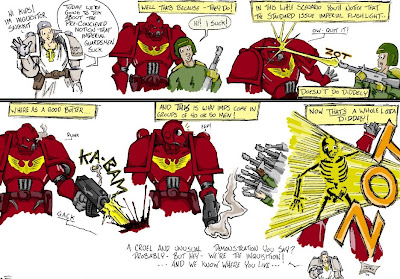