Keep on the Shadowfell 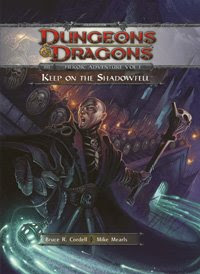 I've been going through this new adventure, due for release on May 20th. Wizards sent us a store copy early, something they don't usually do. I'll be running this adventure in my D&D 4 campaign next month. The adventure, from it's physical appearance to its layout, is all about function.

Whereas past adventure products have been thin, soft cover booklets with maps printed on the inside covers, or hardback tomes of questionable value, Keep on the Shadowfell comes in a softcover pocket folder. On one side is the flimsy adventure booklet, full color but basically magazine quality paper that gets ratty kind of fast. Think Dragon magazine. If you've got any of the collectors instinct in you, this will be annoying. The other side of the folder includes five quick start characters and several large, double sided, fold-out encounter maps (a total of 6). Not all encounters get these maps, but key ones do. All the maps in the adventure booklet are usable, with clearly defined 5' squares with every creature's location marked.

The small town of Winterhaven is the location of this adventure. The adventurers are not from this town and the town description is only a few pages. It's enough to build upon, and certainly enough to run the adventure, but it's a flimsy location in need of fleshing out if you want to make it a long term campaign base. I'm very happy with that, as it has just enough information to be usable for the adventure while allowing me to use my own made up town in its place.

The adventure itself spoon feeds information in an easy to use format. Wizards of the Coast D&D 3 adventures have been moving towards this model for years now. Originally you might be told there were three monsters in a room, with a page number to the Monster Manual, if you were lucky. Lately WOTC has provided better encounter stat blocks and tactical information. This new format should take just one reading and with the all the information provided on one page.

I went to my bookshelf to compare a 3.x adventure from Wizards of the Coast, but I was surprised to realize I don't have any. I've got adventures from Necromancer Games, Goodman Games, Green Ronin Publishing and my Ptolus tome from Malhavoc Press. Wizards of the Coast D&D adventures have generally sucked in the past, throw away products by lesser known authors. One of the accepted premises of the D20 license was that WOTC wouldn't have to write these slow selling money pits. Keep on the Shadowfell is written by my favorite current D&D author, Mike Mearls, along with long time veteran Bruce Cordell. Wizards is re-claiming adventures as their territory once again.

After five minutes searching online, I found a torrent of Scourge of the Howling Horde, the most recent 1st level 3.5 adventure. It should provide a good comparison. The adventure was part of a file that included every 3.x product printed by WOTC. Sigh. I'll discuss the problem of the ability to download the entire Wizards catalog in another post, but hopefully you'll forgive my piracy for this project. Both Scourge and Keep start the adventure with a fight on the road by minor adversaries.

The Scourge adventure setup is the height of 3.5 WOTC adventure design, so it's a good baseline to compare 4th edition Keep on the Shadowfell. In Scourge, there are three common goblins. The revised 3.5 stat block style is streamlined a bit and easier to use, with boxes to mark off hit points. However, there's generally an assumption that the DM will handle the location, creating a scene with a road, an overturned wagon with some crates and the goblins. You'll need a battlemat, not supplied, but you do get a new tactics section, which basically discusses how the goblins will be fighting: shoot & scoot. You won't need detailed tactics as these monsters will likely fall after one hit. The encounter will be quick, uneventful, and unfortunately, pretty boring.

Scourge includes a chart providing experience points. These are new additions. Before a couple years ago, you just got a page number in the monster manual and you needed to calculate experience based on the challenge rating of the monster, the level of the characters, and a chart in the Dungeon Master's Guide. I usually plugged this into a Java experience point calculator due to the complexity. You have three bits of information using two different books and the character sheets of the players. It's a chore.

Keep on the Shadowfell builds on the later work of 3.5. the first thing you notice up at the top is the encounter is worth a set number of experience points. Whether you're 1st level or 20th level, it's worth 475 XP (and it is XP not EP), divided equally among players, even if they're different levels. No chart, no cr0ss-referencing or complex division based on varying character levels. No Java calculator. The adventure also has a better idea of when the party is likely to level.

Keep starts with kobold brigands are ambushing the party on the road. There are two kobold dragonshields (tough guys), a kobold slinger (artillery)m and five minions (1hp throw away monsters). There is a miniature scale battle map provided that you can fold out on the table (not all encounters do this), and the smaller map on the encounter page lists precisely where the monsters are located (all encounters do this).

Tactics are well beyond shoot & scoot, with the tough guys waiting for the minions to attack first, so they can determine the biggest threat. The slinger stays in cover as long as possible. We're told that none will retreat back to their lair under penalty of death. The scenario includes a description of the lighting and how the environment will effect cover and movement. The "What's Next?" section in each encounter gives advice on how to move the adventure forward.

Both Keep and Scourge are for 1st level characters, but there are eight combatants in the Keep encounter compared to three in Scourge. The bad guys have over a hundred hit points in the 4E encounter, compared to 14 in the 3.5. Characters have a correspondingly larger number of hit points in 4E at first level. Which encounter should last longer and be more fun?

This is an intentional effort to flatten out the fun curve in D&D. There are sweet spots in 3.x, where characters are most effective and fun to play. 5th level is the most obvious one, where spell casters get 3rd level spells and characters begin to come into their own. 1st-3rd level is usually a boring slog insisted upon by cruel DM's (I'm one). This 4E 1st level encounter very much resembles a 5th level 3.5 encounter. My guess is that 3.5 encounter will last two rounds, while this 4th edition ambush should be a fairly sophisticated encounter lasting six to ten rounds. Consider the curve flattened.

I've skimmed the rest of Keep on the Shadowfell and it looks fun, albeit conventional. There are a few traps, a final boss encounter with a view of some really nasty high level stuff to come. That's a fine thing for the first 4E product. We need a conventional, traditional D&D vision right now.

The one thing I noticed is that magic items appear to be more singular. Rather than a +1 sword, we get a sword with a name that happens to be +1 but also has a minor power that gives it flavor. Will 4E be able to pull this off? The problem with unique items in 3.x was that a) characters outgrew them and, b) gear was built into a characters effectiveness.

A 10th level character without thousands of gold pieces of value in magic items was not effective and would be under-powered. Want to run a 3.x game without magic items? You can't unless you seriously tweak your encounters. 4E gets away from the equipment = power treadmill, which means we can (and should) see fewer magic items and less accounting amongst players to min-max their gear. There are also supposed to be rules to upgrade or better utilize magic items as players gain power. That +1 sword with a name and flavor can somehow act as a +2 sword when the time is right. There's nothing more frustrating than creating a cool magic item for your group and have them sell it off later on for a generic one that's 5% more effective.

As you can tell, I'm excited and hopeful about 4th edition. I'm looking forward to running Keep on the Shadowfell, although I'll be waiting until the 4E release in June, when my group can make proper characters. If you can't wait, there are 5 pre-generated characters included in this adventure, with rules for leveling them up through third. They'll be 4th level at the end of the adventure (you'll need the core books for that).

I was a bit apprehensive at first, but after reading the quick-start rules in Keep on the Shadowfell, I wouldn't hesitate to run this adventure without the core books. This also means if you're currently running 3.x, you shouldn't feel the need to study extensively before running your 4E game, at least not if you've got Keep on the Shadowfell.