End of Netflix and Traveller

Last night I watched the bottom of the barrel of my Netflix queue. I think I'm going to suspend my account until I've got a list worth watching. It's like I've seen the light with torrent. I'm looking around wishing I could send a check to someone for the great service I'm getting. Season 3 of Weeds was addictive and season 3 of Battlestar Gallactica was also pretty great. Both of those are months away from Netflix distribution.

The bottom of the queue was mostly bad fantasy movies that I felt compelled to eventually watch. Beowulf took three sittings over the weekend and after watching the "making of" video on the disc, I understand why. It was a manufactured, rushed job, by design. I tried to watch the Dragonlance movie last night, but it was unwatchable. It's quite a shame too. I loved the books in college and it was a hot property, selling many millions of books. It deserved much more than cheesy animation, not fit for Saturday morning cartoons. Darkon was kind of interesting, a documentary about SCA type LARPers and how their fantasy outlet means so much to them in their life. Many are pretty miserable in their daily lives and their hobby brings them happiness. Dressing up in costume and whacking people seems kind of strange to me, but I'm living in a giant glass house, so.... The one glimmer of hope was Turok: Son of Stone. It's an animated feature about a Native American outcast warrior who ends up in dinosaur land. Not great, but well paced. Dinosaurs, volcanoes, and revenge. Not bad.

Traveller
I finished putting troop gear on the 40K vehicles last night. I took a break for the evening and started reading the new Traveller RPG from Mongoose. It looks promising so far, at least after the first chapter or two. It starts out assuming you're not familiar with an RPG, going over gaming definitions, dice types and the types of Traveller campaigns possible, with references like Firefly, Starship Troopers, Star Trek and Honor Harrington novels. It's D6 based, with stats being comprised of two D6's and larger scale rolls made "percentile style" with two D6's, as in a two ones would be 11, two sixes a 66, etc. So far it looks promising, although I'm a little concerned with the spelling errors, stuff that could have been picked up by a simple run through with a spell checker. Then again, Traveller is spelled incorrectly with two "L's."

I brought in a dozen copies of the book and it is selling slowly. New role players are unaware of its heritage and basically don't care, especially with so many great sci-fi options available, such as Dark Heresy and Serenity (arguably a Traveller rip-off). The old-school gamer response is usually that they already own it or they already own three different editions. The cover is the same style as the original books, which I'm thinking is impeding sales. That there have been at least three other versions of Traveller doesn't help, especially when the original books have been reprinted and are still available. It's not going to be the big hit of the year I was hoping for, but with some luck it could be a steady seller. Mongoose is supporting it with regular releases, with the next one in June.

40K Tallarns
As I mentioned, the gear is on the vehicles and the missing laser piece installed. Most of the rough riders arrived yesterday. One of the sergeants is still coming from eBay and I'm looking for one more. I don't really need it though as sergeants have to use the same weapons. The mortar teams arrived too. Although I've decided against using mortars because they suck in-game, the mortar crew are perfect models for the basilisks. 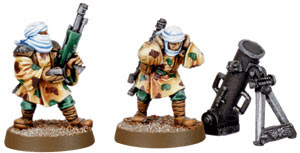