I felt like actually finishing something, so the vehicles got transfers and the first sentinel got based. Unfortunately, the varnish was bad, so I didn't get to completely finish. The first basilisk got a weathered look from the bad varnish, which isn't half bad. The sentinel looks kind of beat up now, which I like. It was a brand new bottle of Armory varnish, although I don't know how old it was. It looked good as I was spraying it, but the varnish slowly turned white. I was reading that another coat of "good" varnish might fix it, so I'll give it a shot with some Testor's Dullcoat from the store. 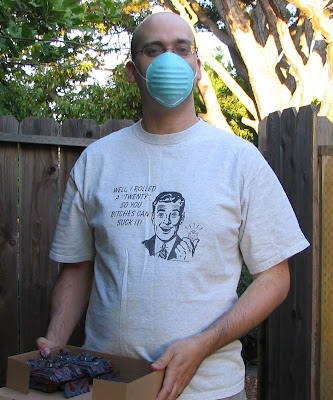 I failed my saving throw on the varnish, but I might get a do over. I did make my Fort save against chemical poisoning thanks to the mask and my wife's insistence on a better ventilated area, aka the side of the house. 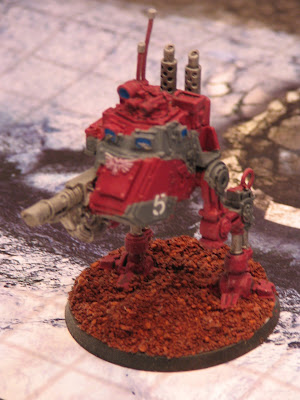 Here's number 5 with his fancy number and iron ore basing. Under the base material I used a sandy paste from Vallejo to break up the flat surface. Notice how washed out it looks, ala bad varnish. 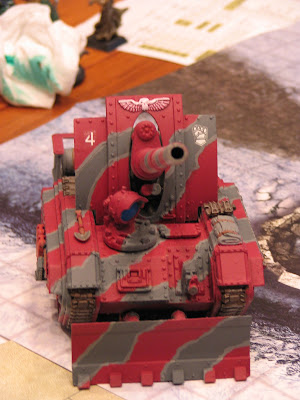 All the vehicles are numbered with low numbers and have the white fist emblem. I'm not sure what it means, but I saw it on some of the Tallarn vehicles in Forge World's Imperial Armour 3. 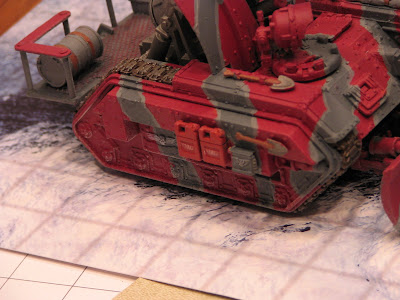 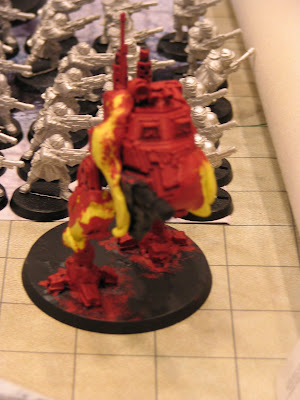 I don't usually show models in process, but here's a sentinel that just got it's secondary coat of Mechrite Red paint. The lumpy yellow stuff is "blue tack." The next step is a coat of Blood Red over the mechrite. Then I take off the blue tack and draw the lighter gray line around the dark gray camo. 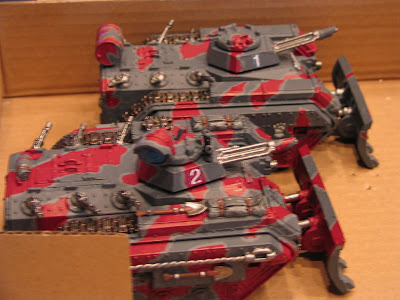 These two guys narrowly escaped getting varnished. The command Chimera has "Tallarn" across one side, something a pretentious officer read was required. As if the men in heads scarves running across the desert didn't give it away.
Posted by Gary Ray at Tuesday, May 27, 2008