Someone tried to break into the store Saturday night. Rather than bashing in the glass in the front, the easy way, they too a crow bar to the back door. They broke the lock, but it's one of those expensive commercial locks and they just managed to force it into the door frame. The first locksmith wanted $300 to replace the lock, but my property managers locksmith just repaired it instead. The property manager will end up billing me for it later. Part of a commercial lease says that any damage from break-ins is the tenants responsibility.

The costs of the business have been weighing on me, mostly because I've got this horrible formula in my head. Every free and clear dollar that comes out of the business, takes ninety two dollars in sales to make. When I shop for office supplies or have expenses like this $300 lock, I start multiplying the number by 100. $300 break-in expense? That's nearly $3,000 in sales! It's not an accurate calculation, since part of the cost of doing business are many of those expenses. They're already included in that $98 of costs.

Theft and in-store shrinkage is normally thought to account for about 2% of you cost of goods sold. It's included in the usual 60% gross costs formula. 50% goes to replace the product (hopefully not more), 2% is credit card fees, 2% shrinkage, etc. The first store had very little shrinkage, so I only grudgingly accept that my costs have gone up 2% in the new store. Break-ins are another matter entirely, and although insurance covers major problems, little problems like the lock aren't included.

Basilisks
All three are put together now. I still have to add some details and I'm waiting on a Tallarn head for one of the gunners. I can now put one together in three hours, which got me thinking about the costs of actually getting them assembled. Then I remembered I'm supposed to be enjoying this process. I do, but sometimes I just want them done. Sentinels are next.

I've been more accepting of the sci-fi genre now that I've lost the technicals and decided on the sentinels. I'm also planning on that red mars paint scheme. 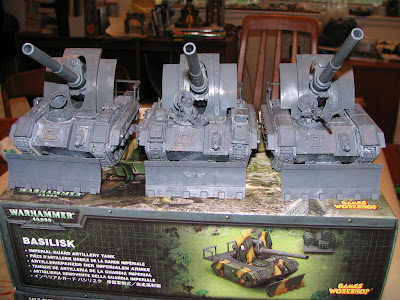