My 40K project is coming along nicely. As long as I have models to put together, I don't have to start painting, right? 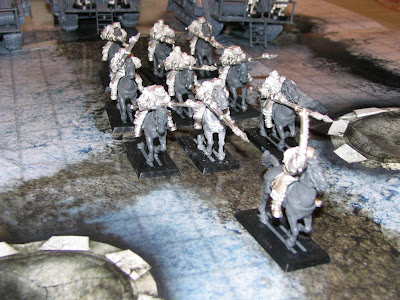 Ten Rough Riders. Returning from patrol. The lead rider with the sword is the sergeant. I've got two 5-man squads of rough riders, but so far only one sergeant model (I need two). Sergeants are out-of-production, so I'll be waiting for another on eBay. Rough Riders come in two models (1 and 2), not including the sergeant. The sergeant seems to be required to have a lance in the rules, but the model isn't provided with one. Maybe that's why they're out of production?

These models are not very good, with tons of flash, giant gaps, and not a lot of detail. I now miss plastic models whenever I have to work with crummy metal. The riders were troublesome to put together. They each took five stages, not including prep work, and could be done three at a time in assembly line fashion: 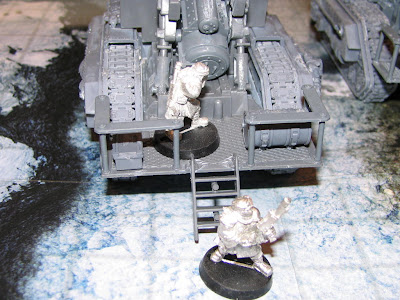 Basilisk Crews. These were mortar crews "re-purposed" to be in charge of the basilisks. I'm debating on whether to bother painting these guys, as the basilisks will have camo netting over the crew area (another project I'm waiting on parts for). You won't see these guys. Still, they look good standing around. 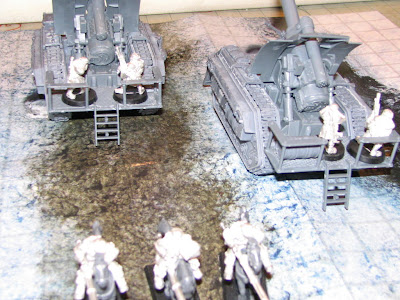 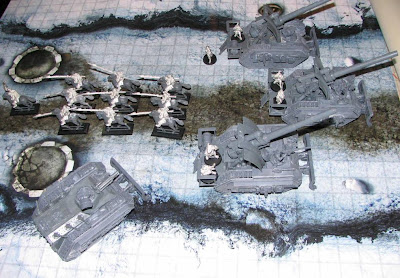 Overview Shot. Here's a look at what I've put together so far. Three basilisks, a chimera, ten rough riders and six basilisk crewmen. 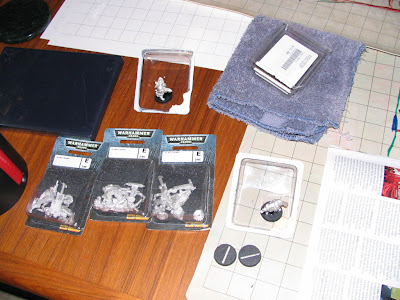 On Deck. The two officer models (senior and junior) are drying, but they were pretty simple. The three blisters are the auto cannons and crew.

Coming Soon. The main troop force, six boxes of 10 Tallarn raiders, is back-ordered from GW. They were supposed to arrive with the autocannon's, but no such luck. GW is telling me a week or two. A new item came out this week from specialist games, a single grenade launcher figure. Normally you need to buy a special weapons pack, which includes him and a plasma gun model, which I don't need. I ordered four grenade launcher figures which should arrive next week. Three apocalypse class Sentinels are also on order from Specialist Games. These are the fully enclosed model that look almost as cool as the Forge World Tallarn Sentinels.

I'm also looking for some realistic red sand for the mars paint job. There is hobby supply red sand, which is bright red and there is uniform red ballast sand for railroading. I'm looking for a more natural, rich in iron mix. One modeler online got his from the deserts around Las Vegas.