40K Imperial Guard sentinels are Star Wars inspired "chicken walkers." They're the most overtly "sci-fi" item in my army, and I kinda like them. Unfortunately, they have a very short lifespan. Armed with powerful weapons but armored with paper thin protection, they're one of the first targets on the battlefield, especially if your opponent are furry little bear creatures. They're like a jeep with a machine gun mounted in the back.

This particular model has an armored crew compartment, which looks cool, but like most 40K options, aren't worth the points. I would think that from a game design perspective, Games Workshop would be smart to reduce points on all the cool options that nobody ever takes. I'll be modeling cool options, but they won't be on the list. WYSINWYG. 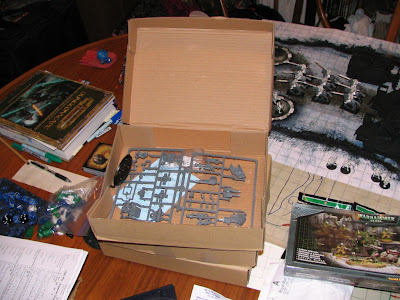 The "apocalypse" or "steel legion" sentinel is no longer available as a standard item. You have to order them directly from Games Workshop and they come in a cardboard box without instructions. They're pretty simple to put together, although when I finished I realized all the legs were backwards. That only took about half an hour to fix and probably resulted in better poses. The feet are still backwards on two of them, but you really have to be looking hard to notice. 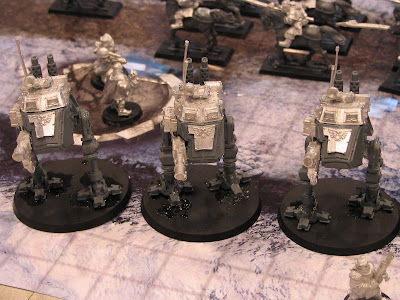 On Deck
I've got four grenade launcher units to put on bases, a quick job.

On Order
I've got four lascannons on order but need a total of six.
I need to order two more grenade launcher units.
The six boxes of core troops are still back-ordered.

The Army List
I'm trying to keep it simple for now, so I've kept the same units, added more men, upgraded missile launchers to lascannons and removed extraneous equipment and junk from the list. I would add flamers, but there are no Tallarn models with them, so I'm not doing that.

Once I see how this list works in play, I can add more units. I'm sorely tempted to add a Hellhound flame-tank to the list, or make the entire list mechanized; tricky to get right and when it does work, often considered too good by other players.
Posted by Gary Ray at Wednesday, May 14, 2008