Dealing with the insurance company was surprisingly painless so far. Break-ins turn out to be on the upswing, or at least everyone tells me, from the cop to the insurance people.

The Stikfas finally arrived, at least box one of two. They're as cool as they look. I thought I hadn't ordered them yet, until the UPS tracking email arrived. Whoops!

This week is looking up sales-wise. I know only a few customers who went to Gencon, but it seems like the entire collective US gaming community holds their breath during Gencon week. It was very quiet, which wasn't too bad since we got a lot of construction work done (well, not me exactly).

I got to push a broom this morning as I helped to clean up the new space. We had twice the junk as we had planned after the area around the bathrooms was torn down. The hauling company had to come this morning for a second trip. 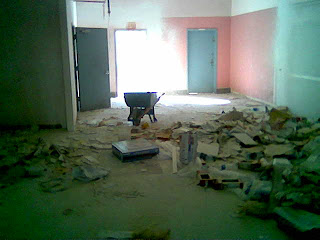 I'm working on a handout for the store and for Conquest San Francisco. Besides this handout we also have a full page ad in the program book, advertising the move. As the board game sponsor, we're bringing out Richard Borg. I can tell you from last year that I can't quantify how this type of community support results in higher sales, but it does. Finally, we'll be featured on the back of the Conquest convention t-shirt. Whoo hoo!

I'm planning to do some gaming at Conquest this time, since I'm trapped there for the weekend with the Bay Bridge out. My preference would be for some Spirit of the Century or D&D, something where my brain doesn't have to work too hard. 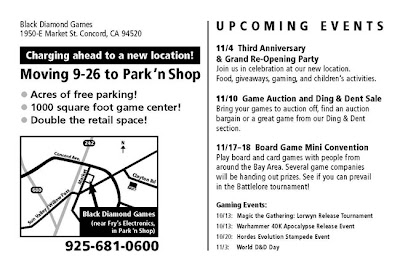 For the Board Game Mini Convention we'll have Blue-Orange Games and Days of Wonder. We're working on a Battlelore tournament.

We're working on an interesting event for our Grand Opening. The local SCA chapter wants to host some combat in the parking lot. I don't know; I think that's kind of cool. Getting my landlord to go along might be difficult. The SCA folks hold their own insurance for events, but it raises a lot of red flags.

Finally, I'm working on formalizing an agreement to enlist an events coordinator for the store. This is someone who can help me manage various events, schedule and plan tournaments, and generally promote the game space of the store. It's an exasperating job when it's done in addition to running a store, so I welcome the help.
Posted by Gary Ray at Monday, August 20, 2007