This morning I'm up early to rent a pick-up truck to move terrain table number one (below) and buy building supplies for number two. We ran out of flocking for this first table, so it's not quite finished. 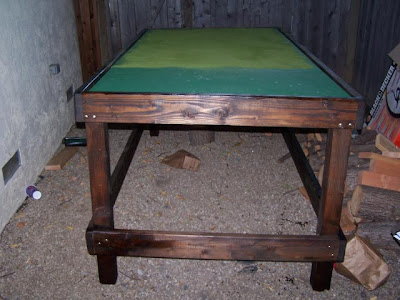 Yesterday was all about marketing (advertising really). I finally nailed down my Yellow Pages advertising schedule. We're focusing on games, with a display ad in four different books (CC Central, CC East, Tri-Valley and Vallejo). We're well covered from Vallejo to the North to San Ramon in the South, all they way to Brentwood and Antioch to the East. We also have a small line listing in Berkeley/Oakland, but not until late next year. I put a display ad in the Toys section of the local CC Central book, but didn't go beyond our local area.

We're having a new TV commercial made in October at the new store. This will play heavily in late October, November and December and then return to our regularly scheduled advertising program in 2008. That TV ad will be modified into a radio ad and will play the week before our grand opening in early November and the week after. Part of that deal is having one of those radio station prize vans show up to do a live show for a couple of hours and offer prizes to anyone who comes down.

All the "we're moving" postcards were mailed out yesterday too. If you are one of the 600 or so people on our mailing list, you'll get one in a couple days. We've got one more direct mail piece related to the move planned.

Our last bit of planned advertising will be for Conquest San Francisco. We've got an ad in the program guide and we'll be handing out flyers. We may have a surprise as well, but I haven't had that confirmed yet.
Posted by Gary Ray at Thursday, August 09, 2007