Today has been about construction, both in the new space and my Ogres.

The landlord is doing the tenant improvement work this week. This includes removing the plumbing and side wall for the area that used to have the hair washing sinks. The place used to be a beauty school. There were also several doorways to the neighboring suite that have been drywalled back to normal.

I've gotten my first bid for our build-out project from my landlord's contractor. It was ridiculously expensive. I already planned on someone else doing the work (my brother), probably at half the cost.

My insurance agent inspected the place yesterday and everything is going well in that arena. He got the property manager to authorize a full electrical inspection (why didn't I think of that?). I learned that the roof is a year old, which is good to know.

The business cards are finished and the flyers are being printed right now.

I'll be renting a truck later this evening to bring the new 4x8 table to the new store. We'll also be using the truck to haul construction materials for the second table. The moving and construction begin next Thursday.

Tomorrow I get my new car stereo installed (the third, under warranty). After that I can get the XM Radio installed that I was writing about a couple of weeks ago.

And finally, below you can see a box of bull ogres assembled and primed (today's craft work). This was my first time working with plastic models. I found it much easier than metal. Warmachine models took a lot more patience and either a pin vice or glue accelerant to get certain parts to stick together. The only think to remember with plastic is to spend some time going over the sprues before assembly. I had all my models attached to their bases when I realized that they had shoes. So I had to pop them off, glue on shoes, and re-glue them to the bases. 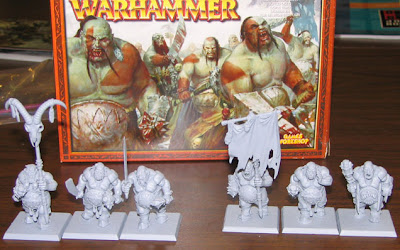 Here's my army list so far. It will change as we play the campaign. We acquire wealth that we can use for strategic expansion of settlements, mining or just adding troops. My troops are very hungry, so their upkeep is high. I'll likely keep this list for the first few game sessions before adding more. Not included on the list is my leader.