I just finished priming my ogre leadbelchers. They shoot a barrage of artillery like junk at opponents. Assembly was a little tricky and I had to use putty on a couple of their shoulders.

The bulls are partially painted, but I wanted to wait before I took another photo.

I've been talking with other players and they're a bit afraid of a frontal assault from the ogres. They're devastating in a charge. The strategy some armies will use to combat this is to avoid that frontal assault, moving around a lot and laying down missile weapon fire.

To combat this avoidance technique, I've got an open secret weapon, the Gorger. Gorgers are big, stupid, powerful ambushers who come in on a table edge of your choice somewhere between the second and fifth turn. This means that if some missile weapon unit is hiding out on a table edge, avoiding my bulls, I can attack them from behind with this bad boy. It's a direct counter to the skirmish strategy of shooting and running away. It throws the enemy's army into disarray.

I'm letting everyone know now because I may not use the gorger in my armies. But you should have in the back of your mind that at he could arrive. 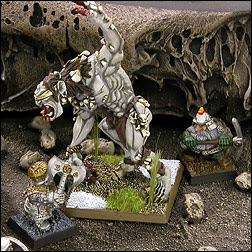