Fixing this one corner took one guy quite a few hours today. 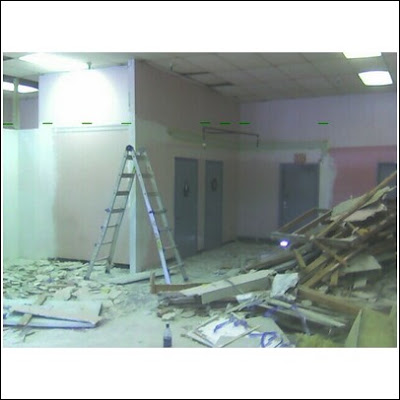 I also had my first battle with my ogres. It was 500 points, which included two groups of three bulls and a Bruiser general. It turns out this is one of the only legal combination for ogres, since it requires a general who isn't a lord (Bruiser) and two core units. Leadbelchers are special units. I didn't have a bruiser built so I proxied my Tyrant. We were fighting empire troops.
In the first round, a shot from an empire canon killed one bull. The bulls and the bruiser charged.

In the second round, the first unit of bulls scared a unit out of a house, chased them down and killed them. The ogre bruiser charged in and killed all three canon units. The second ogre bull unit moved up to the bruiser and scared the cavalry into doing nothing.

In the third round, the cavalry commander challenged the bruiser as he rushed the cavalry unit. The bruiser killed him with two blows from his great club. The second bull unit, with only two ogres, killed all but one cavalryman, who fled off the field. The last empire unit gave up. There is no Bruiser unit sold separately, so I need to come up with a special model.
Posted by Gary Ray at Thursday, August 16, 2007