It's amusing, especially when they rip on the ridiculously complex 3x grapple rules:
http://www.youtube.com/watch?v=G_e5wAUwdmM 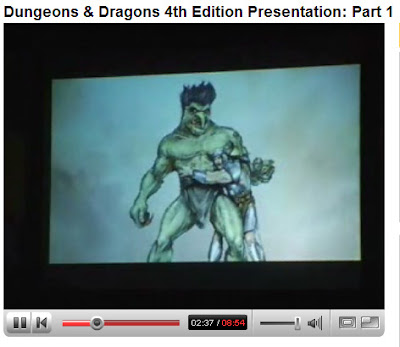 I love you man!

One thing that struck me was the jump from 2nd Edition to 3rd Edition had us going to 2003 (3.5), instead of 2000 (3.0). This is probably just a marketing department omission, but it makes you wonder if it was intentional and if so, what that was meant to say. Perhaps a little white washing over that whole mid-release update (money grab).

Let me just say that I'm really happy Mike Mearls headed the design team. It's what a lot of us fans wanted, but we were told he was too junior a designer for that to happen. He did great work for Malhavoc Press and he was mostly responsible for Book of Nine Swords, which brought a lot to D&D 4.

I found their Insider online subscription service to be very intriguing. You'll be able to enter codes into your account for every book you purchase which then populates your database for use with various tools. This is similar to what eTools did when you paid for your upgrade, minus the time lag (hopefully) and possibly more cost effective. Will regular players subscribe? I'm thinking it's probably something that appeals to more dedicated gamers, probably the same numbers that subscribe to Dungeon & Dragon.

What struck me is the massive bonus for using a legal electronic version of a book with Insider. Anything that reduces piracy helps everyone involved. You can still scan a PDF of a new D&D book but it won't be anywhere near as useful as a free electronic version with an Insider account. In other words, this is a very useful electronic tool that reinforces traditional book sales, which makes me, the seller of said books, happy. As a player I'll have to subscribe too, as a successor to eTools.