The Conquest convention had a good turnout with a lot of positive energy this weekend. I've been here with my family, spending most of my time in the dealer's room (where it's slow). This is probably my last convention where I'm the sole person running a booth. After three years, I'm a bit tired of it and I wouldn't mind getting out and playing some games at times. I'm thinking I'll split the job with another employee or better yet, form an employee-based team that works the various cons.

During the slow times in the dealer's room, I've been enjoying reading and talking about Spirit of the Century with Jess. Jess has been helping me out at the con and she's running Spirit for our group while my D&D game is on hiatus during the move. Spirit has interesting character creation ideas for tying characters together that could be implemented in any role-playing game. Here's what you do: You define a couple of aspects of your character based on their childhood and their adulthood. If you were to play more powerful characters you could add additional aspects for their later, heroic years.

For example, say you wanted to play a D&D cleric. Perhaps you choose the aspect something's not right and over your head for your childhood background. From these aspects you describe how you questioned the evil ways of your small village (something's not right) and occasionally got in over your head righting wrongs. In future games, you can invoke these aspects to gain dice roll bonuses of some sort. It's excellent for character background generation.

When you're ready to tie characters together, you write a short description of a fantasy book in which your character is the hero and two other characters play supporting roles. In The Trouble with Black Briar, a young cleric discovers the young people of the town are being manipulated by an evil cult. With the help of a young warrior, a visiting son of the town's baker and a clever street urchin, the cleric cleans up the town and confronts the evil cult leader. The player creating the warrior and the rogue character write their own stories including two other characters in supporting roles. With a little work at the beginning, we never have to meet in taverns again. 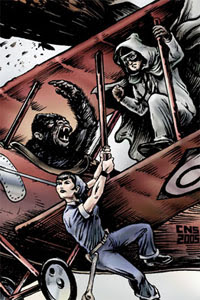