Rackham's stock was suspended and they filed for bankruptcy protection in France. It's not terribly surprising. Sometimes I think the artists must run the company.

...largely related to slow sales of AT-43 in Europe, on which Rackham placed a great many of its hopes for the future. AT-43, a science-fiction miniatures game using pre-painted figures, was intended to bring in new customers and to make up for the loss of revenue from declining sales of the Confrontation product line, viewed to be at or near the end of its practical life cycle. Trading in Rackham stock on the French stock market was halted in light of the filing.

I was in Paris earlier this year and was surprised to find very little Confrontation on the shelves of game stores. AT-43 had just come out and each store had a single box in the corner of their stores. Not much love, even from the French. There was a ton of Games Workshop, choking the shelves of every game store I visited. No game space in Paris game stores though; people in France apparently have kitchen tables and friends.

Rackham has long been mismanaged, especially with its business in the US. It's been a comedy of errors for some time now; a comedy because I dumped Confrontation about 18 months ago so I have some breathing room to laugh. In reality, my players dumped Confrontation long before I kicked it to the curb. Rackham has beautiful art, amazing sculpts, but indecipherable rules and bad relations with everyone they do business with. AT-43 is a good game with good rules and nice models, but Europe has always favored fantasy over Sci-Fi (as do I). Combine the slow sales in Europe with the mismanagement in the US and voila! If they were British they would blame the game stores. I wonder how it works in France?

Maybe now Fantasy Flight can focus on sending us some games. I personally think they're approaching the end of their can do no wrong life cycle. We're going to start making some tougher stocking decisions with regards to FFG. If they want to treat their products like periodicals or worse, seasonal availability, we might do the same. 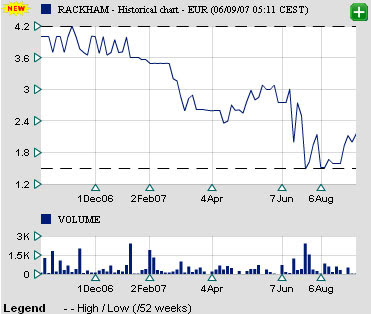