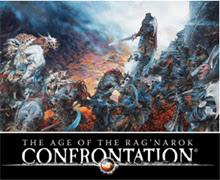 A pre-painted Confrontation starter was announced today. The more I think about their bankruptcy/re-organization, the more I think it may just be a standard financial tactic in France, kind of like a "time-out" in a children's game.

Here are some details on French bankruptcy:
This is from a a dry but interesting European bankruptcy article here.

Anyway, with an $80 price tag, I'm assuming the starter set will look a lot like the AT-43 starter set. I know a lot of people will be scavenging their smaller box sets for fantasy terrain (myself included).
Posted by Gary Ray at Wednesday, September 12, 2007