Three years ago I was a disillusioned IT worker looking for a simpler life. I was married without children and my wife worked. Opening a game store seemed remarkably easy from how I saw other Bay Area stores do it. It seemed to work much like a grocery store; you put stuff on the shelves and people came and bought it. Salespeople were just clerks, there was no game space, and the owners were usually off doing something else. Having a working wife meant I didn't have to worry too much about income -- I've since learned the working spouse is an important factor in game store success!

What I quickly learned when I opened is that to survive as a game store nowadays you need a lot more than a convenience store business model. You need intensive product knowledge, the ability to sell and not just clerk, and you need events to drive customers to the store. You also need patience and perseverance, as nothing is every predictable in retail. Those other stores I originally saw are mostly out of business now, unable or unwilling to change their ways. They say 40% have closed in the last 2 years, but nobody knows for sure. Other stores have adapted and now thrive. Some hang on with rumors of impending closure. Owning a game store or any business really, is very hard work and just as unpredictable as a so-called real job. The only difference is that I know I've got a job until the bank account is empty.

On the bright side, owning your own business usually means you're willing to work harder for yourself than for an employer. I find it immensely satisfying despite the long hours and low pay. I make a lot less money, but I'm surrounded by people I enjoy and stuff I like. I also realized that I don't need as much money as I thought. Much of what I spent money on in the past was a result of boredom and unhappiness, stemming from dissatisfaction with what I was doing. That cycle is broken for me now, which is ironic considering I sell so much stuff to the dissatisfied. With my Buddhist Studies background, I could go on for hours about dissatisfaction, but instead I'll tell about something fantastic.

Within six months of owning Black Diamond Games, something amazing happened. My wife and I had been working on adopting a child for years. It's a long and expensive process requiring background investigations, training and tens of thousands of dollars. Out of the blue, I got a call at the store asking if we wanted to adopt a newborn boy. My wife, who was no longer working, jumped in the car and drove eight hours to Los Angeles to pick up our son Rocco. Rocco is the best thing to ever happen to me.

Now the situation had changed. More accurately I should say our situation changed, since I was thinking with a family in mind. I was now supporting three people on a meager game store salary and I had a child to think about. Children seriously mess with your thinking, especially if you've lived your adult life without them. For a long time, quitting the store seemed inevitable under the circumstances. It was only the lease that kept me there back then. If we had adopted Rocco say, six months before the lease ended instead of six months into it, my plans would be a lot different.

Deciding not to quit but to expand the store is summarized in a phrase my brother used: Go big or go home. With real world challenges and expenses, my options were to quit the store and get a real job (triple the pay, three-fourths the hours, massive boredom) or go bigger, in hopes of building something that can support my new family, but also something I could be proud of. I gave it a lot of thought, and it would be easy to quit and point to my family as the reason. How many people blame their crappy jobs or professions on their family obligations? I could even use the currently popular excuse that I wanted to spend more time with my family. In the end, I think you have to do things to make yourself happy. I'm not going home just yet. We're going big. 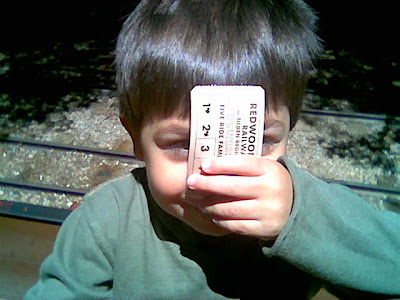 Rocco with his foo-foo ticket
Posted by Gary Ray at Sunday, September 09, 2007