Day Before the Move

Today was crunch time and I realized I had a lot to do and nobody was scheduled to help! Luckily Joe showed up and helped for most of the day.

My main task was receiving the Hanson order. The order was mostly comprised of jigsaw puzzles, kid's science sets, and various toys and games only available from them. 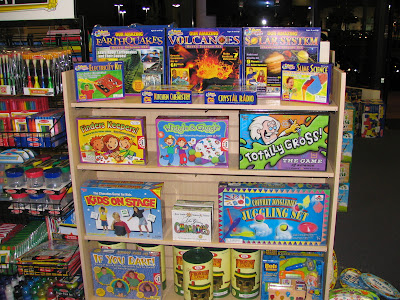 Some of the fun items from John Hanson Co.
While I was receiving Hanson, Joe was working to place the Thomas stuff on the rack. My sales rep told me it should fit on the one Thomas rack that I ordered, with maybe a shelf or two on a second bookcase. I still believed this even after receiving a massive quantity of Thomas stuff. Joe walked in and saw the forest of Thomas and knew right away I had a problem. As you can see, Thomas took up the entire wall! 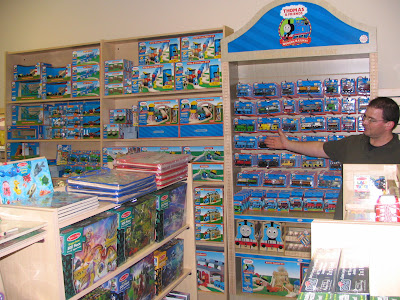 When I got home my two-year old crawled into my lap and pointed to the thumbnail image of this photo. He was very excited and when we blew up the image, he spent a long time pointing to various items and telling me about them.

Hanson and Thomas took half the day. I started looking around to see what was left and realized the place was filthy. The contractors had been drilling holes and patching drywall and the landlords repair people had spent the last few days replacing the lighting ballasts. All the junk that accumulates above the drop ceiling was now over everything in the store.

We started cleaning. Soon the vacuum cleaner broke. Stores go through a vacuum cleaner every eighteen to twenty-four months. We just hit that magic day. The vacuum pulled up a thread from a carpet seam and the motor died. Joe and I went over to Fry's to buy another one. In the past I would talk about the interesting features of the vacuum and all it's bells and whistles. Now I just see it as the disposable appliance that it is. It's an Electrolux. I think it's kinda feminine and dainty. Joe likes it better than the Royal it replaced.

While I cleaned for four hours, Joe accomplished another great task, putting together the Melissa & Doug art rack. This item arrived with missing parts. Joe went through all the little packets of parts from the various fixtures we've put together over the past few weeks and found what he needed to put it together: 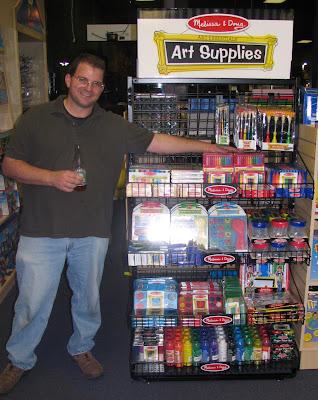 Here's another photo of the Games Workshop section. We keep refining the layout. 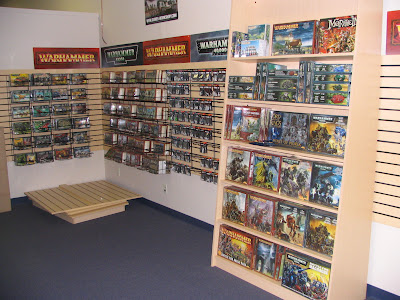 The blister rack still needs to be organized. To the right of the big bookcase will be a magazine rack with rulebooks and codices for all the miniature games. This will replace the Manglers that you usually see used to display GW books. Those wire racks destroy the books over time.
Posted by Gary Ray at Saturday, September 22, 2007